Smoke from raging Russian wildfires blew thousands of miles to the east, reaching out over the Pacific Ocean 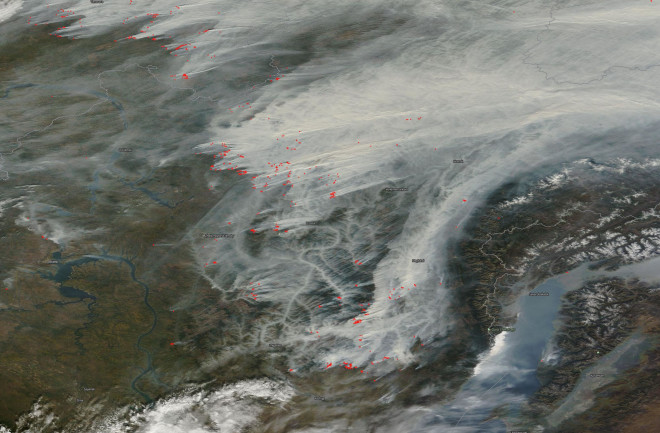 Smoke streams from multiple Russian wildfires on Sept 28, 2016, as seen by NASA's Terra satellite. Active burning is marked in red. Lake Baikal is at lower right. (Source: NASA Worldview) Toward the end of September, wildfires raging near Russia's Lake Baikal lofted thick clouds of smoke that cast a pall over a huge region. Picked up by east-to-west winds, the smoke was blown more than 3,000 miles to the east, all the way out into the Pacific Ocean. Make sure to check out the animation lower down in this post showing aerosols from the fires drifting east. But first, some background on these fires:

Siberia has experienced a long-term upward trend in average temperatures near the surface, as seen in this time series beginning in 1979 and continuing through the end of 2015. (Source: Climate Reanalyzer, University of Maine) This year brought a large number of particularly intense wildfires to Siberia. And a “long dry period and unusual warm weather” helped keep the fires blazing several weeks past the normal end of the wildfire season, according to Sergey Verkhovets of Siberian Federal University, quoted in Gizmodo. The season typically winds down in early September when the first snowflakes start to fly. Satellite imagery shows some wildfire activity extending into early October. The image at the top of this post shows the smoke from dozens of individual blazes, as seen by NASA's Terra satellite on Sept. 28, 2016. The red dots mark places where a sensor on Terra detected active burning. Lake Baikal is in the lower right quadrant of the image. Note the snow cover on the surrounding mountains. This is indicative of just how late in the season these wildfires were burning. Also check out how the smoke is filling numerous valleys in the region, creating a beautiful, if unsettling, filagree pattern in the satellite image.

Smoke from Russian wildfires north of Lake Baikal blew 3,000 miles to the east. The pall extended all the way to the Bering Sea, a marginal sea of the Pacific Ocean between Russia and Alaska, as indicated in this animation of satellite data showing the concentration of aerosols in the atmosphere. The location of the wildfires is circled in the first image of the animation. Areas of highest aerosols are indicated in red. (Images: NASA Worldview. Animation: Tom Yulsman) I created the animation above to show just how far smoke from the wildfires was transported over the course of six days, starting on Sept. 28. The images in the animation are based on data from the MODIS instrument aboard the Terra satellite. They show the degree to which aerosols in the atmosphere were absorbing and scattering incoming sunlight. Aerosols come from a variety of sources, including air pollution, dust storms, volcanic eruptions — and smoke from fires. In the first frame of the animation, I've circled the area where the thick pall of smoke was originating from. I've also included the red marks indicative of active burning. As the animation progresses, you can follow splotches of red indicative of high aerosol concentrations drifting east across Siberia and out over the ocean.