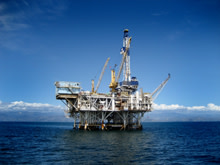 It sounds more and more like some offshore oil drilling is going to happen. Congress can't be like "mountain sheep, standing back and butting heads" over drilling, Senate Majority Leader Harry Reid said today. Reid, on a conference call with T. Boone Pickens about their National Clean Energy Summit to be held Tuesday in Las Vegas, praised the recent Senate compromise that would allow some drilling as near as 50 miles from shore. There are a number of well-known problems with offshore drilling: It probably won't make any sizable dent in the oil market, the oil wouldn't be available for the better part of a decade, and there's already a shortage of oil rigs to do the drilling, plus any leaks or other environmental hazards that drilling could create. But a compromise on drilling could be necessary to get what Reid repeatedly praised today as the real key to promoting alternative energies technologies—tax credits. As we covered on Monday, the renewal of solar power tax credits is being held up in the Congress by the current drilling deadlock. The question at hand is how far Congress will allow new drilling to go. "It's not a black and white issue," said Reid, who says he might be open to some drilling. Pickens, the billionaire oilman, has no such restraint. Though he has repeatedly said the U.S. can't drill its way out of the energy crisis, Pickens says he supports new drilling in the Outer Continental Shelf, the Arctic National Wildlife Refuge, and any other available land—anything to reduce the amount of foreign oil imported into the U.S. Reid and Pickens pledged to look at any and all possible energy sources at their Tuesday conference, which will feature former Pres. Clinton, New York City Mayor Michael Bloomberg, and several governors. "We're going to talk about anything anyone wants to talk about," Reid said, including nuclear power, solar, wind, natural gas, and what the government can do to encourage their development. After the talks, the organizers plan to submit their plan to both political parties' fall conventions. Hopefully, their plan for the country's energy future will be seriously forward-looking—including major investments or tax credits for renewable energy and steps to move away from fossil fuels—especially if it comes at the cost of more oil drilling. Image: iStockphoto