Seen from space: the Indonesian fires producing more CO2 each day than the economic activity of the United States 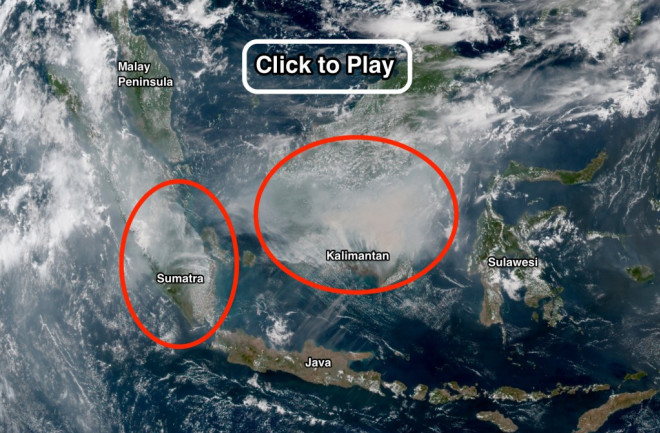 A screenshot of an animation of satellite imagery from the Himawari-8 satellite reveals dense smoke billowing from extensive fires in Kalimantan and Sumatra. Smoke (see circled areas) has a slight color tinge compared to whiter clouds. Click for the animation, which runs from Oct. 14 through the 22nd. (Source: NOAA/RAMMB/Japan Meteorological Agency) Huge swaths of Indonesia are burning, blanketing a wide region in thick palls of smoke that threaten the health of millions of Southeast Asians. So far this year, nearly 110,000 fires have broken out in the island nation (as of Oct. 22), most of them in Kalimantan — the Indonesian portion of the island of Borneo — and Sumatra. Since September, these blazes, most of them in carbon-rich peatlands, "have generated emissions each day exceeding the average daily emissions from all U.S. economic activity," according to the World Resources Institute. Click on the screenshot at the top of the post to watch a time-lapse video of the Indonesian fires, as seen from space. The video consists of an animation of images captured by the Himawari-8 satellite between Oct. 14 and 22. I've circled the areas to watch. Both clouds and smoke mingle in the atmosphere, and it can be difficult at times to tell the two apart. The clouds tend to be whiter than the smoke. (Also, the dark frames correspond to nightfall each day in the animation.) "Fires in forests and former forestlands occur in Indonesia in the dry season every year," writes Bruno Vander Velde of the Centre for International Forestry Research, or CIFOR. Most fires are deliberately lit. Some then escalate and get out of control. Some may have been smoldering in peatlands for months or even years." This year, one of the strongest El Niño's on record is helping to exacerbate the fire season — and things are likely to get even worse in coming months.

SEE ALSO: Strong El Niño persists, and it's likely to continue into spring. Here's why.

“Critically, the strong El Niño translates into a delayed onset of the rainy season . . . Our research shows that the severity of the fire season is related to the onset date of the rainy season. If it’s delayed, fires will burn longer and intensify the environmental and social impacts.

Thanks to El Niño, it looks like Indonesia is on track to seeing the worst fire season since 1997, when 11,000 adults in Southeast Asia died prematurely from poor air quality caused by the fires.