Seeding Reefs With Bacteria Might Help Them Survive Climate Change

Can we revive coral reefs by seeding them with just the right cocktail of microbes? 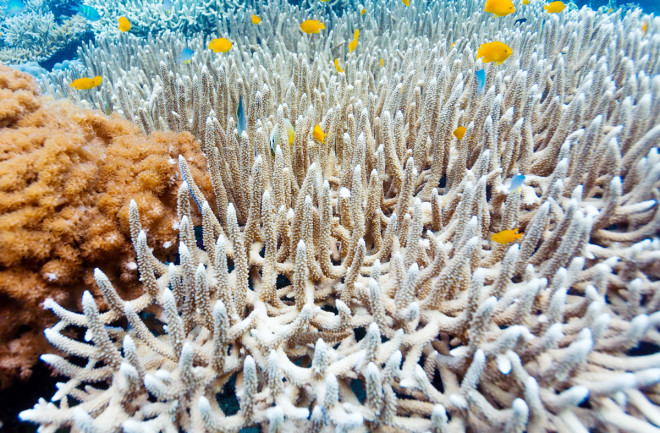 As reports of coral reef die-offs rolled in year after year, marine biologist Raquel Peixoto couldn’t help but feel inundated. Mass reef bleaching events were already five times more common by 2016 than they’d been in the 1980s — a pace that has continued with ocean warming trends, which only exacerbate the die-offs. That’s a big problem for the larger ocean ecosystem, since coral reefs support thousands of fish and invertebrate species — more than any other undersea environment.

With images of corals’ dead white skeletons haunting her, Peixoto started brainstorming solutions. “Trying to do something,” she says, “makes me less depressed.”

At some point, a thought occurred to her. What would happen if she dosed threatened reefs with “coral probiotics” — strains of beneficial bacteria known to support coral health? In the past, she’d used petroleum-eating microbes to treat mangrove trees covered in spilled oil. So it seemed plausible that the right mixture of bacteria might fortify reefs against stressors like ocean temperature spikes and disease epidemics. And after a bleaching event, the microbes might help coral colonies recover better than they would otherwise.

After months of planning, Peixoto, her colleague Phillipe Rosado and their team — mostly from Brazil’s Federal University of Rio de Janeiro — tested their coral probiotics in the lab. The results, reported in The ISME Journal in December 2018, confirmed Peixoto’s hunch that beneficial bacteria really do help corals survive major stressors. The findings also suggested that such treatment could prove critical to future reef protection efforts.

To assemble their library of coral-saving probiotics, Peixoto’s team harvested seven helpful species of bacteria from natural Indo-Pacific Ocean colonies of Pocillopora damicornis coral. The scientists sequenced bacterial genes to locate species with the traits they were looking for. Some of the chosen bacteria, for instance, make anti-microbial compounds to ward off disease, while some protect against heat stress. Still others reduce the number of certain molecules that damage coral cells’ DNA.

Once the bacterial cocktail was ready, Peixoto and her team dripped a liquid solution containing the microbes onto some wild coral samples in the lab, and then put both treated and untreated samples through stress tests. In one set of tanks, they cranked the water up to almost 90 degrees Fahrenheit — a blistering temperature for coral. They infected some of the normal-temperature and warmed tanks with bacteria known to cause disease.

After about a month, the untreated stressed corals had bleached into skeletons. But those treated with the microbial cocktail had thrived. They kept disease-causing bacteria at bay better than untreated corals, and instead of bleaching, they mostly maintained their normal, brilliant colors. In addition, the mix of microbes on the treated corals changed, suggesting that some of the introduced probiotics had taken up lasting residence.

Other marine biologists see Peixoto’s study as a gateway to future trials on natural reefs. The Brazilian team has “clearly shown the concept works, which is an amazing breakthrough,” says aquatic biologist Michael Sweet of the U.K.’s University of Derby. Oregon State University marine microbiologist Rebecca Vega Thurber agrees, praising Peixoto’s use of bacterial species that are native to most reefs: “She is not applying foreign agents, but raising the natural flora of healthy corals. I think this approach is unique.”

If Peixoto’s experiment can be replicated on a large scale, Vega Thurber says, it suggests a viable strategy for reef protection all over the world. Yet such a strategy wouldn’t be without risks. Introducing large numbers of microbes to reefs could have unintended effects on the ecosystem, even if the same microbe species live there naturally. But Vega Thurber says that the global reef situation is dire enough to justify this kind of active intervention. “Is there a risk?” she asks. “Perhaps. But one that, given the devastation of coral reefs, might be worth it.”

For her part, Peixoto is proceeding full steam ahead. She and her team hope to launch trials of their microbes on natural reefs within the next year, while also perfecting customized microbial cocktails that can be deployed broadly. “We are trying to develop at least two or three microbe combinations to cover most of the reefs,” she says.

Her quest feels more urgent than ever: On a recent dive off the Brazilian coast, Peixoto and her colleagues surfaced in horror after seeing huge swaths of dead coral. She hopes that someday, she can help replace those haunting, bleached skeletons with fortresses of living color.

[This article originally appeared in print as "Reef Rescue."]