Seattle the Epicenter of Something Again

The Seattle Times has a good story about a mayoral proposal to impose fees on any business that distributes stuff in paper or plastic bags, and to ban Styrofoam containers. For every paper bag or plastic bag you put, say, groceries in, you get charged 20¢. Also, those plastic forks with which you enjoy your beef pho in front of Mad Men? Banned. Even that little plastic bucket of chili sauce is going to have to be replaced with something biodegradable. 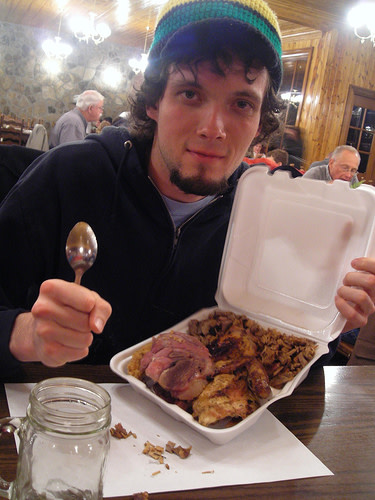 Mayor Greg Nickels's proposed measure is headed toward a City Council vote; it's expected to pass, and to go into effect in 2010. This is another example of Portland being the tail that wags the dog in the Northwest; the Oregonian bastion of rectitude banned Styrofoam containers in 1990. A restaurant owner quoted in the Seattle Times piece speculates that this may lead directly to an uptick in chopstick usage. It's interesting to contemplate which ancient skills will experience a renaissance as we get rid of environmentally destructive conveniences. Blacksmithing? (See this intruiging article about a guy in Montana). Stonemasonry?Image: flickr/brookage