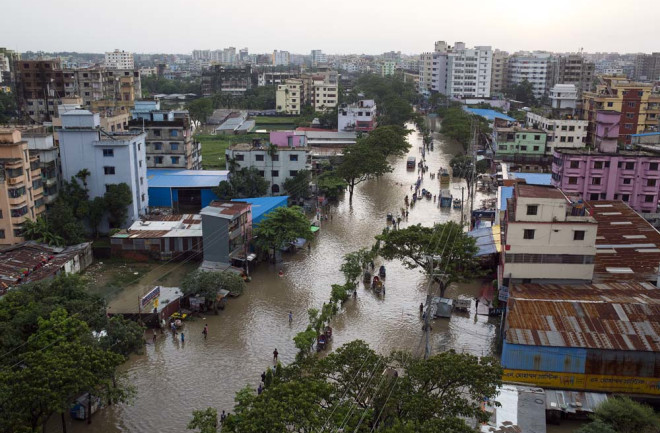 Sea levels could rise for centuries, in part due to greenhouse gases transferring their energy to the oceans. This would contribute to flooding in coastal cities like low-lying Chittagong, Bangladesh.  | Zakir Chowdhury/Barcroft Media via Getty Images

Even short-lived atmospheric greenhouse gases, like methane, leave an imprint in the oceans that can last centuries, according to a paper published in the Proceedings of the National Academy of Sciences in January.

A hotter atmosphere warms the oceans, which expand, leading to sea level rise. This can be a slow process. Gases can take anywhere from a decade (methane) to 1,000 years (carbon dioxide) to transfer their energy to the oceans. And once gases arrive there, it’s hard to get them out. The takeaway is that if humanity stopped cranking out greenhouse gases immediately, sea levels would still rise for centuries before the heat dissipates through Earth’s atmosphere and into space, says study co-author Susan Solomon, an atmospheric scientist at MIT.

The study brings grim news for low-lying islands like Tuvalu in the South Pacific and coastal cities worldwide. “It’s not a tsunami,” Solomon says of the watermark rise. “It’s very, very slow. But it’s inexorable.”