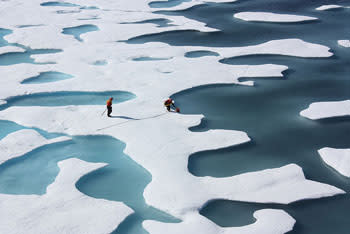 Melting sea ice develops chains of ponds on its surface.

Arctic sea ice is often up to 12 feet thick, insulating the water below from sunlight. Though carpets of green phytoplankton are common in the region once the ice melts in summer, the dark water below sea ice has always been considered a no-man's-land for light-loving plant life. However, as scientists on a research ship last year discovered, once the sea ice melts even a little, the validity of that assumption evaporates. They found a mat of plankton 30 feet thick and more than 100 miles wide blooming beneath a sheet of melting sea ice

that was, at its thinnest, just under 3 feet thick. Enough light got through, thanks to the melting ice, for the plankton to thrive. Since ice of this thinness is common, the scientists think we may need to rethink the conventional wisdom about the iced-over Arctic water being lifeless: there could be hundreds of miles of plankton under there that we just haven't noticed before. As thicker sea ice becomes rarer, due to global warming, such ice-covered blooms could become more widespread, and could occur earlier in the season than blooms that happen in the open ocean, since they could get started before the water is clear of ice. This, in turn, suggests a potential sea change in our sense of the chemistry and biology of the Arctic Ocean, though in exactly what direction isn't clear. Will earlier blooms change the way that Arctic animals, like whales, feed? Will more plankton result in "dead zones" where the plant life has gobbled up all the oxygen? Will Arctic waters, which are already known for their ability to absorb carbon, absorb even more? At this point, it's hard to say.