Scientists Propose a New Marker for the Anthropocene: Chickens 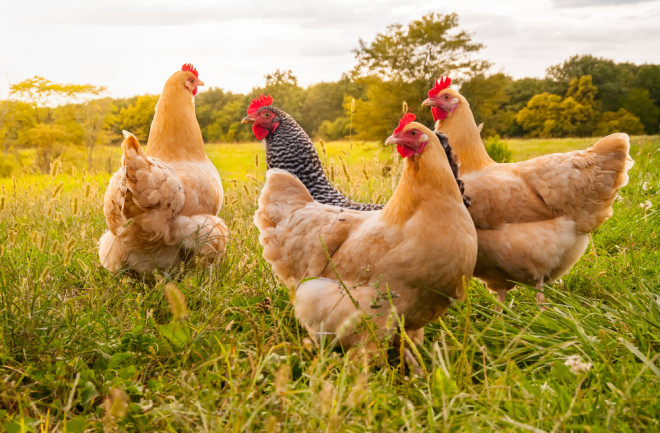 Behold! The herald of the Anthropocene. (Credit: Moonborne/Shutterstock)

Imagine an archaeological dig far in the future. Scientists are excavating a site somewhere in what was once North America, peeling back layers of dirt in search of the remnants of a vanished civilization. Millions of years having passed, there’s not much left, and the archaeologists must be diligent. But, as they scrape and sift, clues to this vanished people emerge, a peephole into a bygone culture.

What objects would these future archaeologists find? What specimens would they dust off, label and send to labs for analysis; what items from the present day would sit on museum shelves?

Plastic detritus, perhaps, or the rusted hulks of cars, or packing peanuts, missing socks and dental floss? It’s hard to say what physical objects will be the hallmark of our society millions of years in the future, but one group of researchers from the UK and South Africa says they already have an answer.

A Legacy of Squawks

Yes, the humble domestic chicken, Gallus gallus domesticus may be our legacy. That’s not to say they’re the only thing that will survive our society, but chickens may well be the definitive one. There’s a standing population of around 21 billion chickens on planet Earth right now, and we eat more than 60 billion a year, though even that may be an underestimate. That means there’s billions of chicken bones going into landfills every year, where they will presumably stay for millennia to come.

Those chicken bones look markedly different than the chicken bones future archaeologists might find from a few centuries ago, too. Intensive breeding programs aimed at maximizing meat yield and minimizing growth time have taken their toll on the birds’ health. The commercial chicken of today suffers from bone deformities and osteoporosis, and their bodies are both larger than, and morphologically distinct from, wild chickens.

The sheer number of chicken remains, paired with their striking dissimilarity to the fowl of yesteryear makes them a good candidate for what geoscientists call the “Golden Spike”. The term refers to an unmistakeable signal in the planet’s sediments that serves to mark the beginning of a new geological time period.

Whatever it is, it must indicate a substantive difference from the time period before. We’re currently in the Holocene, but many researchers argue that a new epoch, the “Anthropocene”, characterized by the dominance of human beings is upon us.

Anatomically modern humans have been around for at least a hundred thousand years, of course, but geologists think in terms of the very big picture. For most of our history, humans haven’t caused the kind of large-scale changes to the planet that would remain visible for millennia to come. Until recently, that is.

Other proposed markers for the Anthropocene include radioactive elements spread around the globe during nuclear tests in the mid-20th century, carbon particles in sediments and ice cores, plastic accumulation or even the advent of human-caused minerals around the globe.

But the sudden appearance of telltale physiological traits, paired with the sheer ubiquity of remains worldwide makes G. gallus domesticus an ideal option for a Golden Spike, the researchers say in Royal Society Open Science. Chicken bones by the billions will be fossilized and preserved after we’re through with them, and it makes them an ideal sign of our presence.

It’s no stretch to imagine that future archaeologists, digging for clues to civilizations past, would stumble upon these avian boneyards. If they do, the dramatic shift in size and bone composition will be easy to pick out. Such changes are unprecedented in the wild, and it’s a clear sign of human intervention, the researchers argue. Our fictional future archaeologists would have no choice but to conclude that the Earth had changed in a meaningful way at that time, and our hand in that event would be obvious. In other words, they would be seeing the dawn of the Anthropocene.

What a pink chicken may look like, far in the future. (Credit: The Pink Chicken Project)

What a pink chicken may look like, far in the future. (Credit: The Pink Chicken Project)

But, just in case our future archaeologists are confused, one group has proposed a way to help them. To really peck home the Anthropocene, the Pink Chicken Project suggests that we should give the birds a trait so outlandish that even the most lackadaisical excavator couldn’t miss them. With gene editing technology, the group suggests, we should turn all of our chickens pink inside and out. It’s a message to who- or whatever may inherit the Earth after us, a stark reminder of our presence (and affinity for chicken products).

The idea is largely in jest, of course. But it does point out that the Golden Spike, whatever it may be, asks us to consider what our legacy will be. We’ve gotten to the point where traces of our collective existence will remain inscribed in the Earth’s skin long after any of us has disappeared. What will be our most lasting contribution to the planet?