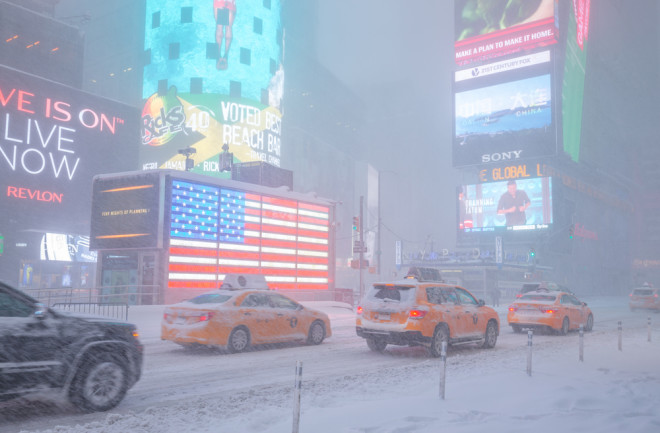 In late February, an invasion of warm, southern air sent temperatures surging above freezing across the Arctic and toward the North Pole. In the two weeks since then, three nor’easters have smacked New England and the surrounding areas.

As the Arctic warms, this trend has become common in recent winters, and it’s drawn new attention to links between the polar vortex — a constant mass of cold, dense air rotating over the north pole — and weather patterns farther south.

When the polar vortex weakens like it has several times this winter, it can cause the jet stream to buckle and smash cold Arctic air into warm and wet air to the south. The result: severe winter storms.

“This year is a great example — a textbook case,” says Judah Cohen, a climatologist with the private prediction center called Atmospheric and Environmental Research. He says that Arctic heat “set up this parade of nor’easters the past two weeks.”

His new study on this phenomenon appears Tuesday in the journal Nature Communications — the same day yet another powerful nor’easter is crippling the East Coast. The team’s research suggests a firm link between Arctic warming and extreme winter weather.

“Basically, this confirms the story I’ve been telling for a couple of years now,” co-author Jennifer Francis of Rutgers University said in a news release. “Warm temperatures in the Arctic cause the jet stream to take these wild swings, and when it swings farther south, that causes cold air to reach farther south. These swings tend to hang around for awhile, so the weather we have in the eastern United States, whether it’s cold or warm, tends to stay with us longer.”

That might seem obvious to anyone living in the Northeast. But while the anecdotes are abundant, tying climate change to powerful winter storms has proven controversial even among scientists. Traditionally, researchers have focused on the ways Earth’s tropics influence mid-latitude weather.

And the trend is also surprising because early predictions for climate change suggested that winter would warm more than any other season, Cohen says. And while winters gotten much warmer there’s also been this unexpected rise in severe winter storms.

This latest research emerged from Cohen’s efforts to forecast weather weeks or even months in advance— most meteorologists look just hours or days into the future. But as a climatologist at AER, he tries to provide clients — everyone from NASA to the insurance industry — with a long-term view.

And in recent years, he’d started noticing a pattern. When heat maps of the Arctic pulsed red — a sign winter temperatures were far above normal — the Northeastern U.S. would soon get smacked with a winter storm. The impact is enough to change weather patterns in Europe and Asia as well.

“It was like the number one signal you could see with a long lead time for getting a snow storm or a cold weather outbreak,” he says.

You can think of the polar vortex like the kitchen fridge — all the cold air is trapped inside. But if you leave the door open, that air escapes.

“When the polar vortex is strong, it acts like a dam and it confines all the cold weather in the Arctic,” Cohen says. “When that breaks down, it’s like a dam bursting, and cold air rushes to the lower latitudes.”

This latest research merely looks at observational data — it doesn’t get into the reasons why. But Cohen sees a clear connection to rapidly shrinking sea ice, which has repeatedly hit record lows in recent years.

“I think that all these severe weather events (this year) are tied to the warming of the Arctic and losing arctic sea ice,” Cohen says.

That means the Northeast could see even more winter storms as sea ice continues to disappear. But the team admits it’s still too early to guess at what might happen.