Scientists Find the Quietest and Noisiest Places in the U.S. 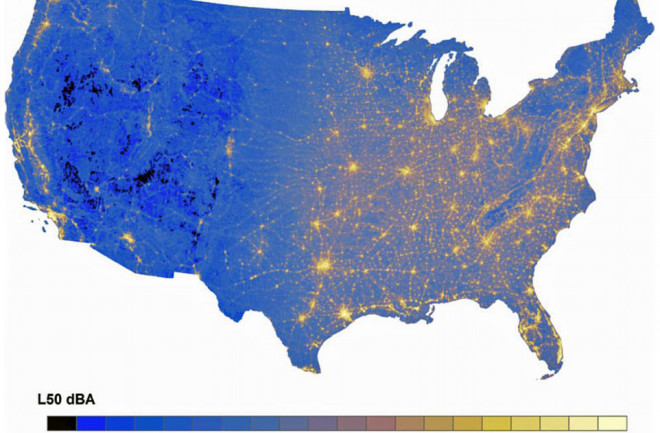 Head for the dark blue if you're seeking some peace and quiet in the United States. (Credit: Natural Sounds and Night Skies Division, NPS) Humans love to make a racket. From our car horns to jackhammers, noise is a constant companion wherever people come together to live, work and play. So where can a person go to find some peace and quiet? Thanks to data gathered by the National Park Service, it’s now easy to find the nation’s sanctuaries of silence. Researchers conducted more than 1.5 million hours of acoustical monitoring at 546 different sites to construct a map (above) that shows the average noise levels throughout the U.S. on a typical summer day. The basic takeaway: The further you head west, the quieter life gets.

A microphone records the sounds of Great Sand Dunes National Park and Preserve in Colorado. (Credit: NPS) The Natural Sounds and Night Skies Division of the National Park Service works to protect our national parks from civilization’s encroaching din. But quiet is becoming a rare commodity — in some areas of the Grand Canyon planes can be heard flying overhead up to twice a minute. Obnoxious noises can put a damper on a family vacation, but humans’ noise is also having an impact on wildlife. Bats and pronghorn avoid noisy areas, and female frogs struggle to hear males’ mating calls over whining of a nearby highway system. Sound is just another stressor for animals to cope with on top of famine, weather and disease. So the NPS is fighting back against sound, and data-gathering projects — like this sound map — provide a solid foundation for policy, planning and decision-making. Soundscape managers can preserve nature’s voice through regulations such as limiting vehicle use in parks or enforcing mandatory altitude minimums for planes.

The sound map, presented at the American Association for the Advancement of Science, doesn’t have many surprises. Noisy enclaves gather on the eastern half of the country in expansive metropolitan areas like Chicago, Dallas and New York City, which have average noise levels of 50 decibels or more. For perspective, a busy restaurant is about 60 decibels. In places like Yellowstone National Park in Wyoming, the soundscape is about 20 decibels — or as loud as humans whispering or rustling leaves. In other words, about the same volume as one person turning to another and saying “Shhhhhh" while they admire the view.