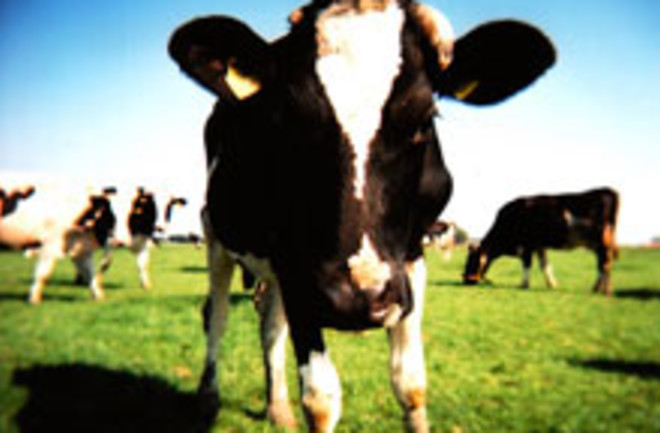 As we've mentioned before, about 18 percent of methane from human activities is generated in the guts of livestock. As such, cow belching, which is how much of this potent greenhouse gas sees the light of day, has become an important environmental concern. In an effort to make cows less gassy, scientists have tried everything from transferring special methane-reducing bacteria from kangaroo guts into cow guts, to garlic supplements, to promoting a switch to kangaroo-burgers. But no one wants to be in the field measuring cow burps. Now a team of scientists from New Zealand have a designed a model cow to study the issue in the lab. In fact, they've built a whole herd of virtual cows, named Myrtle, Buttercup, Jesse, Ethel, Daisy and Boris. Each consists of a system of tubes, pumps, jars, monitors, and blinking lights which simulate the entire bovine digestive system. As News 3 reports:

Food and saliva are added to the cow’s “stomachs” and the end result is perhaps inevitable. “As the materials ferment you end up with what we call the poo jars. That is as technical as an engineer would want to get,” says [researcher Robert] Wood. Methane gas emissions are monitored. “Every time the little unit here flicks, we count the flicks for the amount of gas produced,” says Wood.