Scientists Accidentally Confirm That Jets Can Punch Holes in Clouds 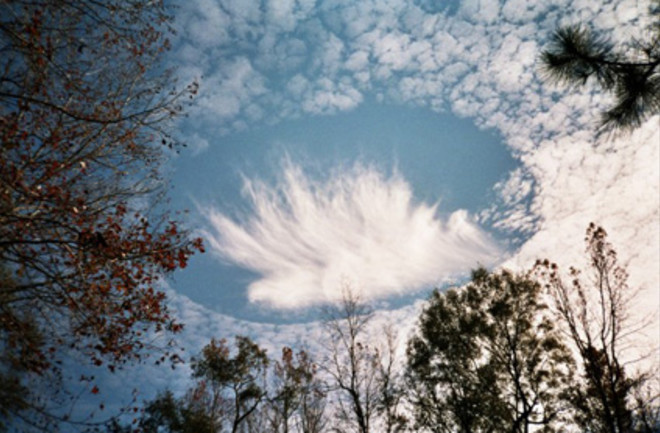 How do you punch a hole in a cloud? Fly through it. Meteorologists had long figured that aircraft were part of the explanation for crazy-looking "hole-punch clouds" like this one. When propeller planes fly through a cloud, they thought, it can exert air pressure that cools water extremely quickly to produce ice. If water vapor condenses on that ice, snow falls from the sky and leaves a conspicuous cloud hole. Now, thanks to a happy accident, researchers confirmed that planes can cause these cloud holes, and that even jets, not just prop planes, can do it. Andrew Heymsfield, a scientist with the National Center for Atmospheric Research, was aboard a research plane near the Denver airport in 2007 when he unwittingly flew through a flurry of snow produced by a hole-punch cloud.

The plane was loaded with instruments for studying how ice forms in clouds. Radar from the ground picked up a strange echo in their wake, indicating oddly-shaped snowflakes. “We didn’t know it, but we went right through this precipitation feature that was spotted from the ground,” Heymsfield said [Wired.com].

Their readings, when matched up with the path of planes in the area, helped unravel the mystery:

The researchers then linked satellite images of hole-punch clouds to flight schedules to show that jet aircraft, not just propeller planes, can also punch holes and produce snow. The supercooled droplets freeze after passing over the jet planes’ wings, Heymsfield said [Wired.com].

DISCOVER: 10 Bizarre-Looking Tricks of the Weather

(photo gallery) 80beats: A New Way To Make It Rain: Shoot the Clouds with Lasers