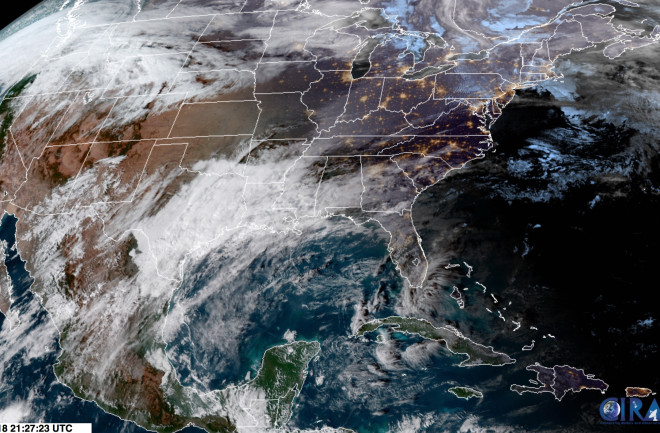 A view acquired by the new GOES-East satellite on Monday, Dec. 18, 2017. Click on the image to see the latest view of the Continental United States. And then hit the Play button on the left of that web page to watch an animation of recent images. (Source: RAMMB/CIRA/SLIDER) A brand spanking new advanced U.S. satellite is now fully operational and monitoring weather, wildfires, lightning and other phenomena.

The satellite formerly known as GOES-16, now renamed GOES-East and fully operational. (Source: NOAA) Okay, technically speaking it's not really brand new. It was launched on Nov. 19, 2016. But until today it has been on something of a shakedown cruise. Now the testing is over. And so today, the National Oceanic and Atmospheric Administration made it official: After a final shift in its orbit, the spacecraft is in what's known as the "GOES-East" position of 75.2 degrees west longitude. And it is fully operational, "providing forecasters with sharper, more defined images of severe storms, hurricanes, wildfires and other weather hazards in near real-time 24/7," according to NOAA. Prior to today, the spacecraft was called GOES-16. Moving forward, you may well continue to hear it referred to with that name. But given its location in orbit, it is also being called GOES-East. Yes, this is confusing! Just remember that GOES-16 is one of several GOES-series satellites, and it is located in the East position. There's also a GOES-West position.

The overlapping views of the GOES-East and GOES-West satellites. (Source: NOAA) As you can see here, the two satellites have overlapping views of the Western Hemisphere, including North America. Even while it was undergoing testing as GOES-16, the satellite proved invaluable. From its perch in geostationary orbit 22,300 miles above the Earth, the satellite's Advanced Baseline Imager, or ABI, was able to provide detailed views of the surface as quickly as every 30 seconds, considerably faster than previous satellites. It also provided imagery of Earth at twice the resolution of any previous NOAA satellite, seeing things as small as .5 kilometers across, compared to 1 kilometer for its predecessors. During its shakedown cruise, GOES-16 also imaged the surface in many more wavelengths than its predecessors. In addition to visible wavelengths of light that we can see with our eyes, the imager works in 15 other spectral bands within the near-infrared and infrared parts of the electromagnetic spectrum. These different channels can help forecasters distinguish between clouds, water vapor, smoke, ice and volcanic ash. This combination of capabilities proved invaluable during this year's extremely active Atlantic hurricane season. For example, forecasters were able to watch Hurricane Harvey in stunning spatial and temporal detail. This helped them better assess the threat posed by the storm, enabling improved emergency preparations and response.

Hurricane Harvey swirling in the Gulf of Mexico in late August, 2017, as seen by GOES-16 (now known as GOES-East) in infrared and visible wavelengths of light. The satellite helped forecasters and emergency managers better assess the threats posed by multiple hurricanes during the very active 2017 season. (Source: NOAA) Earlier in the year, when severe thunderstorm season began cranking up in the Midwest, GOES-16 provided incredibly detailed, nearly-real-time animations of storm fronts and supercell thunderstorms. Here's an example, produced with scans of the surface taken every 30 seconds:

GOES-16 captured this view of a cyclonic cloud system pushing across Minnesota on April 18, 2017. (Source: CIRA/RAMMB/NOAA) Watching animations like this gives me an uncanny impression of the dynamism of the atmosphere. It almost feels like I'm watching clouds boil up in a massive cauldron. “We are using the GOES-16 data in ways we planned and in ways we didn’t even imagine,” said National Weather Service director Louis Uccellini, in a prepared statement. “GOES-16 has been a game changer for monitoring hurricanes, wildfires, severe storms, and lightning. Now that it is operational and the data [are] incorporated into the forecast process, we will be able to use it across all our service areas, starting with winter storms.” The new GOES-East spacecraft is the first in the series of next-generation geostationary satellites. The next one, GOES-S is scheduled for launch on March 1, 2018. It is to be followed by GOES-T in 2020, and GOES-U in 2024. I can drive you to further distraction by describing how their names will be changed too, but maybe I should wait on that for a future post!