Couple of sockeye salmon just prior to spawning. image courtesy of Vasik Olga / shutterstock. Sockeye salmon put on a lot of miles during their short life. From the freshwater riverbeds where they hatch and spend their first couple years, juvenile salmon travel some 4,000 miles to the ocean where they fatten up for two years before turning around and retracing their steps. But salmon can't leave actual footprints, nor do they have the luxury of dropping waterproof bread crumbs so they can find their way back home. Scientists have long suspected that these big fish instead use the Earth's magnetism to orient their inner compass. A recent study of 56 years' worth of migration data presents pretty convincing evidence for this geomagnetic hypothesis and how it works. The researchers theorized that when the young fish first head out for the ocean they make a mental note of the particular magnetism at the freshwater/salt water convergence and then try to navigate back to this particular spot on their way back. Imprinting this magnetic landmark on the brain would work because the pull is a little different at every location on the planet; geomagnetic intensity decreases with distance from the North and South Poles. Thus imprinting is a plausible, if difficult-to-test, theory.But the researchers realized that one quirk of geomagnetism could help their investigation---the fact that the Earth's magnetic poles move ever so slightly year-to-year. They used this slight annual variation, as well as unique geography, to put their theory to the test. 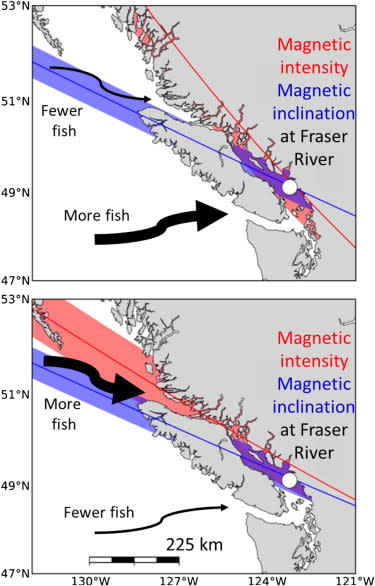 The arrows indicate the homing route of salmon, their size relative to the number of fish choosing each route. The red and blue lines indicate the magnetic pole for that particular year. Image courtesy of Nathan F. Putman et al. The mouth of the Fraser River is located just inland from Vancouver, British Columbia. Between this salmon spawning ground and the Pacific Ocean lies a major obstacle for the fish: Vancouver Island. In order to get home, the fish need to swim around the island, either north through the Queen Charlotte Strait or south through the Juan De Fuca Strait. By analyzing the migration paths over the last half century, the researchers found some strong patterns, which they published in Current Biology this week. Every year the majority of the fish took the same route, sometimes north of the island and sometimes south. So researchers mapped these migratory routes and overlaid annual geomagnetic data. They found that when the geomagnetism drifted north of the imprinted location, the fish returned home through the northern strait. But when the geomagnetism tended further south, the fish ended up swimming down and around the island instead, since it brought them closer to their magnetic landmark. The researchers pointed out that temperature also played a role. Warm waters urge to fish to go further north for fattening, so they usually take the shorter, northern route back home. This is the first hard evidence of an animal imprinting geomagnetic location in order to navigate home, and it comes just in time. The Fraser River hosts the country's most famous Pacific salmon run, but the number of fish has been dropping since the 1990s, alarming both conservationists and commercial fishers. This makes the results of the study even more important because they could have major implications for the management of declining sockeye salmon.

Some Types of Coronavirus Only Cause Colds — What Makes This New Virus Different?

The Importance of Sleep for Your Body