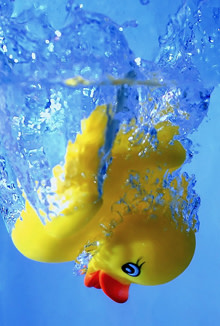 NASA researchers have released 90 rubber ducks into the Greenland’s Jakobshavn Glacier—the same glacier that may have sunk the Titanic a century ago—in an attempt to understand why glaciers move faster in the summer and why sea levels change. Because the Jakobshavn Glacier is known to discharge as much as seven percent of Greenland’s melting icesheets, NASA researchers are specifically interested in knowing how the meltwater moves through the glacier. While they can clearly see how the icebergs fall into the ocean, it’s impossible to see exactly how the water flows. In theory, as the sun warms the ice in the summer, the top layer of the glacier melts and flows through a hole in the glacier until it reaches the other side. As such, the researchers suspect the rubber ducks will end up in the surrounding water in Baffin Bay. The rubbery toys have the words “science experiment” and “reward” written in three languages on them and even have an email address in case anyone finds them. So far, there haven’t been any fishermen who’ve hooked any rubber duckies, but the NASA researchers remain hopeful that someone will find the ducks soon. "We haven't heard back but it may take some time until somebody actually finds it and decides to send us an email that they have found it," says Alberto Behar of NASA’s Jet Propulsion Laboratory.Rubber ducks have floated in the ocean before. Sixteen years ago, 29,000 plastic yellow ducks, blue turtles, and green frogs from China were pushed overboard from a cargo ship during a storm. Over the years, the toys have floated around the world, marked with the words, “The First Years.” While the rubber duckies never made it safely into the tubs, they did help scientists learn about the ocean’s surface currents, as they were able to track their movement at about a mile a day, as they traveled into the Arctic ice around the North-West Passage and into the Atlantic ocean. Most of the ducks headed South and were found in Indonesia, Australia and South America. Last year a retired teacher found the first rubber duck to wash ashore on a British beach somewhere between Woolacombe and Putsborough. Although the duck survived the 17,000 mile journey, it clearly took the toll of the sea: It was covered in barnacles and brown algae, and part of its head was missing.