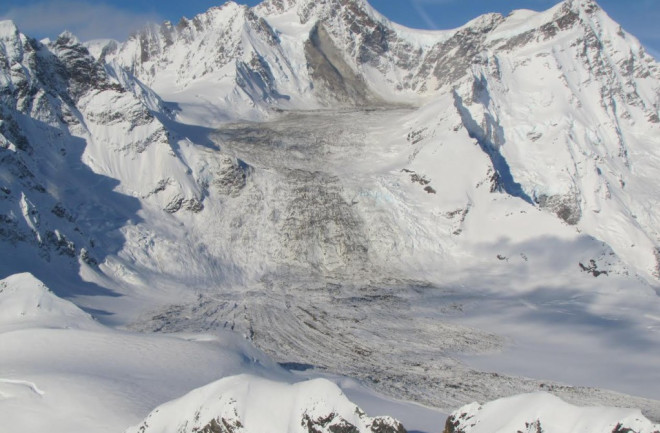 Part of Mt. La Perouse in Alaska collapsed last Sunday, creating the massive landslide seen in this photograph shot from a helicopter by Drake Olsen. (Photograph: Used with permission from Drake Olson, FlyDrake.com) A near vertical wall on Alaska's 10,728-foot Mt. La Perouse collapsed on Feb. 16, sending 68 million metric tons of material thundering downhill. This would make it the largest known landslide on Earth since 2010, according to NASA's Earth Observatory. The photo above, shot from a ski plane by Drake Olson, shows what it looks like. The slide of rock and snow is more than 40 feet thick and runs out about 4 and a half miles.

The Operational Land Imager on Landsat 8 acquired this image on February 23, 2014. (Source: NASA Earth Observatory) In the image above, captured by the Landsat 8 satellite on Feb. 23, the avalanche debris appears light brown compared to the snow-covered surroundings. (Make sure to click the image to expand it.) For a closer view, as well as before-and-after views, check out NASA's Earth Observatory post on the slide here. Columbia University seismologist Colin Stark first picked up signs of the slide, which occurred in a remote area of Glacier Bay National Park and Preserve, in data from a global earthquake monitoring network. Broadly speaking, Stark studies what he calls the "physics of geomorphology" — including landslide processes. I'm hoping to interview him some time today or over the weekend, so make sure to check back for an update.