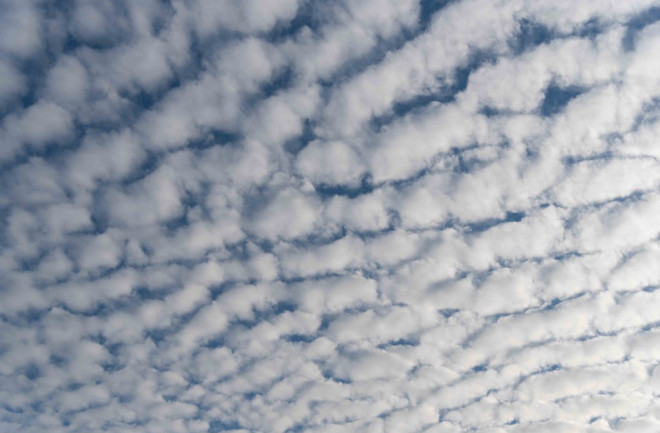 Stratocumulus clouds spread out like puffy cotton balls in orderly rows above the ocean in the sub-tropics. The low-hovering clouds provide the planet shade and help keep Earth cool. But in a new study published this week, researchers say that rising carbon dioxide levels in the atmosphere could wipe out these clouds. The discovery means that, under “business as usual” emissions scenarios, Earth could heat up 14 degrees Fahrenheit within a century.

“We are perturbing a complex system that we do not fully understand yet, and the system may well respond in surprising and nonlinear ways,” said Tapio Schneider, a climate scientist at the California Institute of Technology in Pasadena, who led the new research. His team’s results are “a warning shot” for the future,” he says.

Stratocumulus clouds act like a shade umbrella for the planet. The low clouds reflect some 30 to 60 percent of sunlight back into space. Although they are Earth’s most frequent cloud type and cover nearly 20 percent of the tropical oceans, global climate models have difficulty simulating them.

Part of the problem is that clouds drive climate processes on scales too small for our current computer models to resolve. Instead, current global climate models approximate the impact of these cloud formations using related variables like temperature and humidity. But Schneider’s team says this method underestimates the impact that stratocumulus and other low-lying clouds might have on global temperatures.

In the new study, Schneider his team changed up the climate simulations. Rather than setting the resolution of the simulation based on large-scale dynamics like temperature or humidity as current climate models do, the researchers resolved cloud-scale dynamics. The analysis took months to complete and 2 million core hours–the number of hours to run the simulation multiplied by the number of processor units–of computing. But, in the end, the computationally complex investigation revealed a tipping point for when carbon dioxide levels will shatter these earth-cooling clouds.

When atmospheric carbon dioxide levels rise above about 1,200 parts per million (ppm), roughly three times today’s levels, the stratocumulus clouds abruptly break up. And if humanity keeps burning fossil fuels at the current rate, Earth should hit 1,200 ppm within a century. The researchers published their findings Monday in the journal Nature Geoscience. Without the shading effect of the clouds, Schneider’s team estimates that global surface temperatures will climb 14 degrees Fahrenheit.

And, once they are gone, stratocumulus clouds may never take shape again. In the researchers’ analysis, the clouds only reformed when CO2 levels dropped below current levels.

The results “point to a blind spot in climate modeling,” Schneider said. “Stratocumulus clouds are important, current models simulate them poorly, and they seemed to have missed the possibility of strong feedbacks from them.”

“We need better models,” he added, and he and colleagues are working to build them.