Rim Fire Now Two Thirds as Large as the City of Angels. This Amazing Timelapse Video Shows its Growth 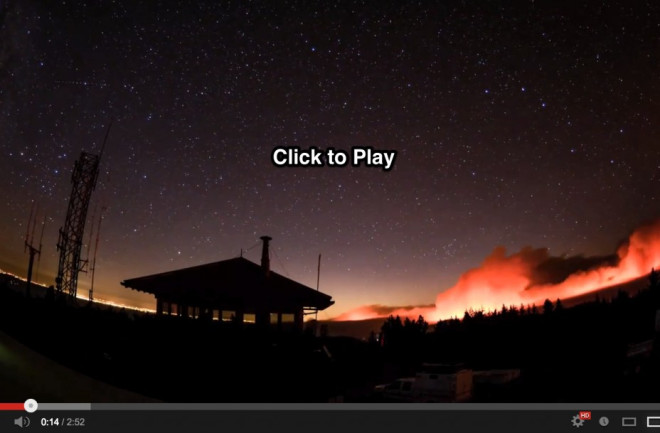 Screenshot from a timelapse video of California's Rim Fire. (Source: Yosemite National Park Youtube Channel) As I write this early Thursday morning, the Rim Fire, as seen in the amazing (and disturbingly mesmerizing) timelapse video above, is advancing steadily through Yosemite National Park. It has now consumed 300 square miles — an area nearly two thirds as large as the sprawling City of Los Angeles — making the blaze the sixth largest in California history. (You can find historical statistics here.) The fire is 30 percent contained, up from 23 percent this morning. Even so, it became much more active in the afternoon. And according to the latest report from Inciweb, "Rapid fire growth and extreme fire behavior continue to hamper suppression fire efforts." As the blaze has expanded dramatically, its smoke has spread far and wide:

This image captured by NASA's Terra satellite shows the aerosol optical depth over much of the Western United States on Wednesday, August 28, 2013. The large plume indicated by green to yellow to red coloring most likely consists largely of smoke. (Image: NASA) Click on the image above so you can see it bigger and look at the details. Grey wisps of smoke from the Rim Fire are clearly visible in the lower right quadrant. But the image also includes an overlay based on data from the MODIS instrument aboard the Terra satellite. That overlay shows a property called aerosol optical depth, or the degree to which particles in the atmosphere are blocking the transmission of light. The green to yellow to red colors are almost certainly indicative of particles in smoke from the fire, which apparently have spread more than a thousand miles, all the way up into the Great Plains in Canada. Something tells me this fire is a harbinger of more to come this season. Stay tuned.