Return of the King of Trees

Can biologists resurrect the mighty chestnut that once dominated the forests of eastern America? 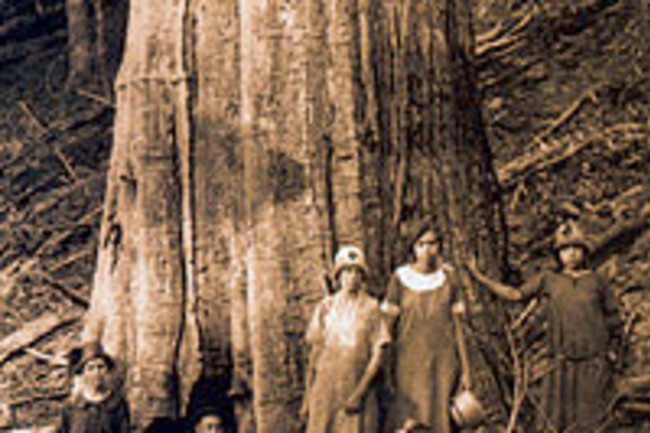 A family photo circa 1920 captures the majesty of a stout American chestnut in Tremont Falls, Tennessee. A mature American chestnut tree is typically about 100 feet tall with a trunk about 5 feet wide. Chestnut timber is as rot resistant as redwood and lighter than oak. Rural Americans also prized chestnuts, which they harvested to sell as a cash crop or to feed to farm animals. | Copyright © Great Smoky Mountain National Park, Courtesy of the American Chestnut Foundation

In the early 1970s, plant pathologist Gary Griffin of Virginia Polytechnic Institute was hunting in the Blue Ridge Mountains when he stumbled on something far more valuable than the grouse he’d planned to bag. “I walked past an enormous chestnut tree,” he recalls. “It had died, but it still had intact bark.” Another man wouldn’t have given the snag a second glance. But such stately old trees—dead or alive—are essential to Griffin’s plans to rescue the majestic species from a tragic end.

Unless you’re of a certain age, the only chestnuts you know are probably the modest Asian types imported as ornamentals. American chestnuts, by comparison, were giants as large as California’s redwoods. They made up more than a quarter of eastern woodlands, and their stout, straight trunks supplied unusually strong and rot-resistant timber. Then in the early decades of the 20th century, blight wiped out American chestnuts. The disease was discovered on trees at the Bronx Zoo exactly 100 years ago, and it soon spread throughout the chestnut’s natural range, from Maine to Mississippi. More than 3 billion trees died. Some survived as ravaged stumps, sending up shoots that would inevitably be attacked and die back over and over again.

When the Cryphonectria fungus infects an American chestnut tree, it creates nasty-looking cankers in the bark. Over time, the fungus reduces a towering giant to a stump. The tree cannot grow back because the fungus persists in the roots. | Courtesy of the American Chestnut Foundation

Chestnut blight is caused by a fungus, Cryphonectria parasitica, that was probably imported on Japanese chestnut trees purchased by a Long Island nursery in the late 1800s. Mail-order sales of chestnut cuttings may have spread the fungus far and wide long before the disease was recognized. The fungus grows in and under the bark, creating large, visible sores called cankers that prevent the flow of sap. If the cankers fully encircle the trunk, they effectively strangle the tree, and it dies from that point upward. “Functionally, it’s not that much different from taking an ax and girdling the tree,” says William MacDonald, a forest pathologist at West Virginia University in Morgantown.

Of the four chestnut species—Chinese, Japanese, European, and American—American chestnuts are by far the most susceptible to the Cryphonectria blight. Because the Asian varieties seemed to have natural resistance to the fungus, silviculturists from the U.S. Department of Agriculture began interbreeding Asian and American chestnuts in the early 1900s with the hope of producing a blight-resistant hybrid. The Asian-American crosses do yield resistant trees, but they are also much shorter than the pure American species. In a forest, the diminutive hybrids can’t compete with maples, beeches, ashes, and oaks. They lack the spirit as well as the stature of the purebreds. “The American chestnut is a remarkable tree,” says MacDonald. “It will outcompete anything until it gets the blight.”

In the 1980s, the American Chestnut Foundation launched a program in which Chinese-American hybrids were repeatedly backcrossed with American trees. The breeders hoped that a small proportion of each backcrossed generation would retain the high blight resistance of the Chinese trees while looking and acting more American. “You’re progressively diluting out the Chinese genes, except for the blight resistance, which we’re selecting for,” says Fred Hebard, the plant pathologist at the foundation’s breeding farm in Meadowview, Virginia. “The whole point of backcrossing is to get rid of as many of the Chinese genes as you can.”

So far, Hebard says, the scheme is working. A small percentage of each cross does have strong resistance to the blight, and with successive backcrosses, the trees are showing more American traits. But the process is achingly slow. Hundreds of trees need to be pollinated by hand; thousands of seeds must be harvested and sown. Each generation of saplings can’t be tested for resistance until it’s at least three years old. The tests involve injecting fungus into the bark with a cork borer and waiting for cankers to show. After 15 years at the foundation, Hebard has finally planted the progeny of the third generation of backcrosses. They’re still too young to inoculate, and even if they turn out to be both big and resistant, it will be another 10 to 20 years before they can prove they are competitive in the wild. “How many backcrosses do we need? We don’t know that yet,” Hebard says, “and we won’t know until we see 100-foot trees two or three feet in diameter that are doing really well in the forest.”

To speed things up, biotechnologist William Powell and forest geneticist Charles Maynard, both of the State University of New York at Syracuse, are turning to genetic engineering. Their plan is to make a transgenic chestnut with genes that inhibit the growth of the fungus. Ideally, they could insert the resistance genes from Asian chestnuts into American ones. But those genes haven’t been identified, so Powell and Maynard are looking for alternatives. Their favorite candidate is a wheat gene whose enzyme product destroys the Cryphonectria acid that eats away at chestnut bark. In test-tube studies of transgenic chestnut tissue, the gene has protected the formation of lignin, the chemical scaffold of bark. 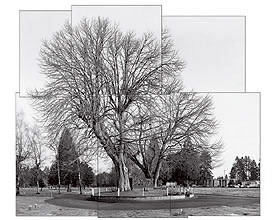 An 88-foot-tall American chestnut thrives in Olympic Memorial Park in Tumwater, Washington. The tree, the largest healthy American chestnut in the United States, was planted by settlers who brought chestnut seed with them from the East Coast. | Photograph by James Balog

But Powell and Maynard have struggled to get past the test-tube stage. Many commercially grown trees—fruit trees as well as timber trees such as pine, poplar, and willow—can be maintained as tissue cultures, transferred to soil, and then grown into whole plantations. “For the chestnut, it turned out to be very, very difficult,” says Maynard, who’s been working on the problem since the late 1980s. He found that the only chestnut tissue that can be cultured and replanted comes from developing nuts, and wrestling the nuts out of a thorny chestnut burr is “like taking apart a porcupine.” The SUNY scientists have harvested more than 10,000 of them, but less than one-tenth of a percent form culture growths that can then be coaxed into whole plants. Once a whole plant is established in culture—with a stem and leaves—“it’s very difficult to root, and once it’s rooted, it’s very difficult to get it growing in soil,” says Maynard.

So the biotech shortcut has turned into a lengthy detour. Even if it succeeds, some scientists are sure to protest the planting of a genetically modified organism in public forests. Griffin is hoping to avoid that scenario by breeding pure, blight-resistant American chestnuts. The first step in his project was to find the oldest, tallest, toughest trees. There was one on a dairy farm in southeast Ohio, another in a pasture just a couple of hours from Blacksburg, Virginia—trees that were alive when the blight first struck. His Blue Ridge snag was one of the biggest he’d ever seen, and the fact that it still held its bark meant it had died only recently. Although a dead tree isn’t much use in a breeding program, there were two living chestnuts of substantial girth nearby that Griffin figured were close relatives. “We felt they had to have some of the same genes,” he says. “A squirrel must’ve carried a few nuts around.”

Some plant pathologists question whether surviving American chestnuts really are genetically resistant and wonder whether interbreeding them can enhance the putative trait. Griffin says that although survivors don’t have as much resistance as Asian chestnuts, they do have some natural defenses. When their branches are grafted onto living stumps and inoculated with fungus, for example, the grafts do better than the average infected American chestnut tree. Griffin thinks that geographically distant survivors may each have unique genes for resistance. By interbreeding them he hopes to combine those different genes to yield tougher offspring. “Our ultimate goal is to get a tree with higher resistance than either of the parents,” he says. More than 100 descendants of chestnut survivors grow on a plantation not far from Griffin’s office under the auspices of the American Chestnut Cooperators Foundation, which is partly run by Griffin’s wife, Lucille. It’s too soon, he says, to tell whether his project has worked.

Meanwhile, Griffin and others are exploring a fourth strategy for saving the chestnut that involves controlling the blight fungus. In the 1950s, European chestnuts, which had been decimated by blight as well, began to rebound in Italy, where they were still cultivated. The Cryphonectria on the Italian trees had caught a virus that limited canker formation. Trees with virus-infected fungus were thriving, and the weakened fungus was spreading to other parts of Europe, reviving chestnuts as it went. Pathologists at the Connecticut Agricultural Station in New Haven gathered samples of the sickly European fungus and identified the virus. But the European fungus proved to be so weakened by the virus that it couldn’t compete against American strains. And in many trials over many years, European fungal strains have proved reluctant to transmit the virus to American Cryphonectria, even when the European fungus is injected directly into an American canker. “I still think it has the potential to work, if we can figure out how to deliver it and keep it established,” says MacDonald, who has been doing biological-control experiments on a rare stand of chestnuts in Wisconsin.

Griffin thinks the chestnut’s best bet lies in a combination of approaches. In one forest stand, for example, he and other Virginia researchers grafted branches from the largest surviving trees onto sprout clumps, then inoculated the grafts with virus-carrying fungal strains. That was in the early 1980s. Today the largest of the grafts is more than 60 feet tall and 20 inches in diameter at breast height, and there are almost no blight-killed branches. “These trees did remarkably well,” he says.

But even when the weakened fungus prospers on a single tree, it doesn’t spread to others, as it has in Europe. The trees that have been kept alive by biological control have each been hand-inoculated, one by one, sometimes canker by canker. It’s a labor of love, with results that today’s researchers probably won’t live to see. Yet no one thinks of giving up.

“Foresters like big trees,” Maynard says. “We may screw around with poplar and willow—it pays the rent. But we like the big ones: the redwoods, the grand firs. The chestnuts.”