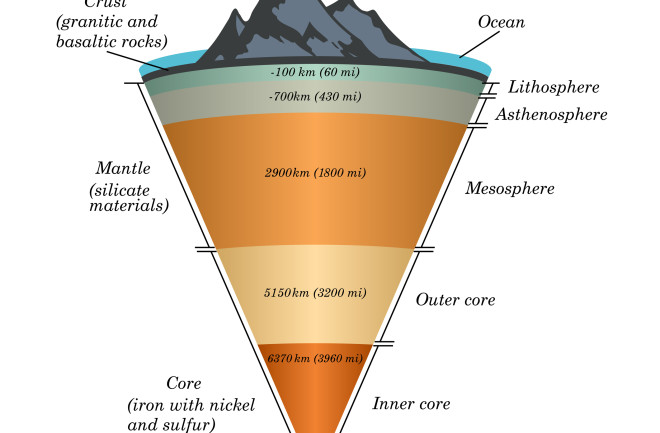 The various layers of the inner Earth. (Credit: Ellen Bronstayn/Shutterstock)

Science is never exactly easy, but it’s especially tough when you can’t see, touch or even really interact with your subject. Consider the plight of a geophysicist interested in the makeup and structure of Earth’s interior. Without being able to dig up a sample of our planet’s ultrahot, ultra-pressurized mantle, how can they figure out what makes our planet work?

The answer, in part, is seismic waves. When the ground shakes, as in an earthquake, the vibrations go through and interact with all the materials in their way. This can provide scientists with a means of imaging all those materials, allowing them to virtually peer beneath the surface.

But sometimes that’s not enough. If the models tell you the vibrations — analogous to sound waves in some cases — should travel at a certain speed, but the data show they don’t, you’re left with an anomaly. Something’s wrong, but without somehow recreating the incredible conditions hundreds of miles below the surface, how can you figure out what?

Just such an issue has been plaguing geophysicists studying the Earth’s innards, who’ve noticed that vibrations from earthquakes traveling through the mantle have been going slower than they should be.

At least until now, that is. According to a Nature paper this week, a team of Japanese scientists figured out what was wrong just by recreating those crazy conditions after all.

Their work all comes down to a specific mineral, calcium silicate (CaSiO3) arranged in what’s called a perovskite structure. Scientists refer to this as calcium silicate perovskite, or simply CaPv. This mineral is a major part of Earth’s mantle, the vast region between surface and the inner core.

The mantle itself is divided into the upper and lower, and the boundary between the two, around 410 miles down, is still somewhat mysterious to scientists. That’s where they’d been finding some of these anomalous velocities for traveling sound waves. One idea was maybe the reason the measurements weren’t lining up with the models was because they didn’t fully understand how the CaPv behaved within the mantle. But it’s hard to know for sure if that’s the case, because in those infernally hot temperatures, CaPv takes on a cubic structure, which breaks down into other forms at temperatures below about 600 kelvin.

As the authors put it, “Despite its importance, no measurements of sound velocities have been made in cubic CaPv at high temperature, because this phase is unquenchable at ambient conditions and hence there is no adequate sample for such measurements.”

So, basically, they just made some.

The researchers synthesized some cubic CaPv from a glass rod, and kept it at temperatures up to 1700 K and pressures of up to 23 billion pascal (for reference, standard air pressure is 101,000 pascal). The mineral maintained its cubic form in these extreme conditions, allowing the team to run ultrasonic sound velocity measurements.

They found that the material really doesn’t behave the way the theories had predicted: CaPv is about 26 percent less rigid than expected, so sound waves would in fact travel more slowly through it than expected — just as had been observed.

Not only does the finding resolve the conflict between mantle models and experimental data, but it also supports another intriguing idea: This region between the upper and lower mantle may be home to subducted oceanic crust — parts of the ocean floor forced into the mantle — rife with CaPv.

“These results could contribute to our understanding of the existence and behavior of subducted crust materials in the deep mantle,” the authors write, and they also suggest new research avenues for directly measuring the velocity of seismic waves through mantle materials.

Slowly but surely, scientists are figuring out better ways to look at and understand the invisible depths beneath Earth’s surface.