Rather than growing like it should in winter, sea ice off Alaska has been shrinking dramatically

Meanwhile, ice losses elsewhere allowed a Russian tanker to make the first ever independent winter crossing of the Arctic

This should not be happening: a dramatic wintertime decline in sea ice in the Bering Sea between Feb. 6-16. Darker blue colors show areas with the lowest sea ice concentrations. One hundred percent ice coverage (and snow as well) is shown in white. Western Alaska is at the bottom, the Aleutians to the left, and Siberia in the upper right. From top to bottom, the scene covers about 600 miles. The animation consists of imagery from NASA's Terra satellite with an overlay of microwave data from the Defense Meteorological Satellite Program. (Images and sea ice data: NASA Worldview. Animation: Tom Yulsman) The Bering Sea off Alaska's west coast has just experienced a shocking loss of ice over a 10-day period — in winter. See the graph below for the details. To my eye it looks like sea ice extent declined from about 420,000 square kilometers on Feb. 6 to about 260,000 square kilometers on the 16th. 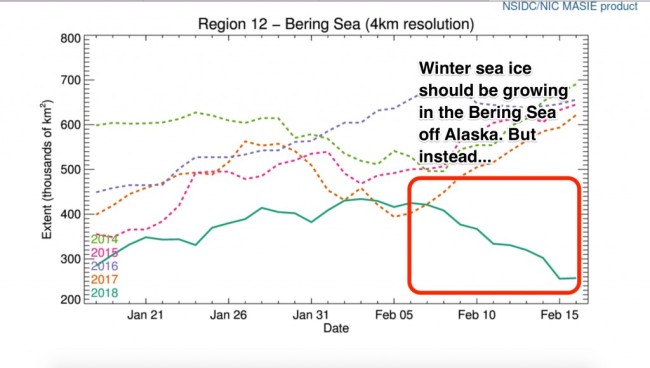 Trends in ice extent for the Bering Sea off Alaska's west coast. (Source: Multisensor Analyzed Sea Ice Extent/NSIDC) That's a drop of 38 percent (and an area of lost ice a little smaller than Wisconsin) — just when the ice should be expanding toward a cold season peak in March. Although ice losses have been particularly dramatic in the Bering Sea, other Arctic areas are also seeing noteworthy reductions in winter sea ice. Helped by relatively thin ice north of Siberia, the massive Russian vessel Eduard Toll was able to make the first independent winter crossing of the Arctic along the Northern Sea Route — with no help from an accompanying icebreaker. “This is the first vessel to transit the Northern Sea Route independently in the late stage of ice formation in the Arctic,” Kirill Bogdanovskiy, shipping director for the Yamal liquified natural gas project, told Tradewinds. “Nobody has done it before.” Here's a time-lapse from the journey: https://youtu.be/JZkD9TFXrdU The tanker, built to plow through young ice that's thinner than the thick, old ice that once dominated the Arctic, left Korea in December. It arrived at the Sabetta terminal on the Yamal Peninsula, where it was loaded with liquified natural gas. 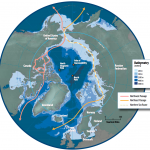 Arctic sea routes. (Source: Wikimedia Commons) From there the ship continued west along the sea route into the Barents Sea — which has experienced particularly significant winter ice losses in recent years, including 2017/2018 — and eventually to France. As for the entire Arctic region overall, sea ice has been flirting with record lows for most of the winter. Last month saw the lowest Arctic sea ice extent for any January in the satellite record, dating back to 1979.

"The Arctic is one of the most rapidly changing environments on Earth, and the change in sea ice extent and duration is one of the most striking signs," said Hauke Flores, an expert in sea ice ecology at Germany's Alfred Wegener Institute. He was speaking at the recent Arctic Frontiers conference in Tromsø, Norway. At first, the most dramatic changes were occurring during the warmer months. No longer, according to Ingrid H. Onarheim, a researcher at Norway's University of Bergen. “We are losing sea ice in all seasons now," she said in her own presentation at the conference. Why care about what's happening in a region so far away from where most of us live? One answer is that as the region warms, nations are eyeing the Arctic's resources — including large suspected reserves of oil and gas. And as the journey of the Eduard Toll illustrates, the Arctic is increasingly seen as a faster way to move goods between Asia and Europe. At the same time, environmental changes in the Arctic portend disruptive impacts far to the south, according to Antje Boetius, head of the Helmholtz‐Max Planck Research Group on Deep Sea Ecology and Technology at the Alfred Wegener Institute. As she put it in an interview during the Arctic Frontiers conference:

We project a furthering of warming as we continue with business as usual — which will hopefully not be the case. Because then there will be further warming, more loss of sea ice, and a thawing of the soils along the coasts. And there will be extreme weather events happening in other regions as the jet streams change.

Climate change in general, and extreme weather in particular — such as increasing heat waves, droughts, torrential downpours and flood — will have major social and political consequences, she noted. Among them: migration of people away from hard-hit areas to other regions. And that could prove very disruptive. "We have no solution for that," Boetius concluded. The bottom line: What happens in the Arctic is not staying in the Arctic. And if we want to minimize the disruption we must transition to a more environmentally sustainable way of living on the home planet. Note:

I want to tip my hat to Sabrina Shankman of Inside Climate News, who I believe was the first to report the news of dramatic ice losses in the Bering Sea. You can find her story here.