Rain in the Arctic

Tom Yulsman is co-director of the Center for Environmental Journalism at the University of Colorado. His work has appeared in a variety of publications, including the New York Times, Washington Post, Climate Central, the Daily Climate and Audubon. 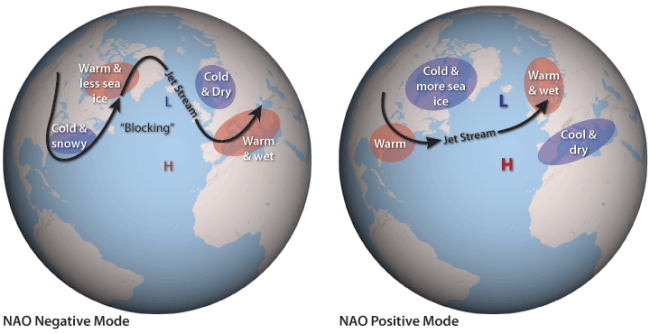 Courtesy NOAA As cold temperatures swept into much of the United States on Monday, and wicked winter weather paralyzed much of Western Europe, the high temperature in Tromsø, Norway---above the Arctic Circle---topped out at nearly 40 degrees. And it rained. I know this for a fact, because I am here in Tromsø for the Arctic Frontiers conference, which ironically enough, is partly about climate change. The organizers handed out---yes, you guessed it----umbrellas. The long and short of the answer to what’s going on is, of course, complex---and not fully understood. What we take to be weird weather is certainly one of those things that happens from time to time. And in wintertime, one of the factors that can bring it on is a phenomenon known as the Arctic Oscillation. Right now it is in a negative phase. Typically, this means that atmospheric pressure at sea level is higher than normal over the central Arctic. Meanwhile, it is lower than normal over middle latitudes. This pattern tends to bring relatively warm temperatures to parts of the Arctic, and Arctic chill to Europe and North America. 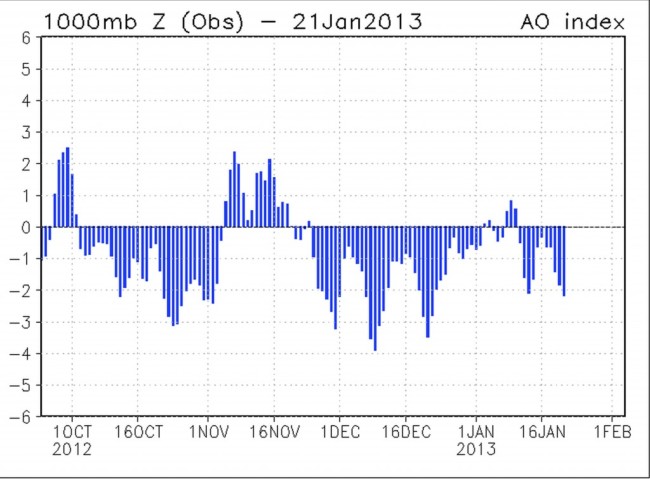 Since early January, the Arctic Oscillation index—a measure of the state the atmosphere over the Arctic—has turned negative. When this happens, atmospheric pressure in the high Arctic tends to increase, while farther south in the central Atlantic Ocean, it tends to decrease. But there may be even more going on. My science-writing colleague Andrew Freedman wrote an excellent post at Climate Central about a phenomenon called “sudden stratospheric warming,” which is tightly related to the Arctic Oscillation. As he wrote late last week:

This phenomenon...started on Jan. 6, but is something that is just beginning to have an effect on weather patterns across North America and Europe.

While the physics behind sudden stratospheric warming events are complicated, their implications are not: such events are often harbingers of colder weather in North America and Eurasia. The ongoing event favors colder and possibly stormier weather for as long as four to eight weeks after the event, meaning that after a mild start to the winter, the rest of this month and February could bring the coldest weather of the winter season to parts of the U.S., along with a heightened chance of snow.

Freedman’s story includes a terrific map-based animation of the development of this event, culminating on January 18 with a big patch of red indicating warm temperatures covering northern Norway and other parts of the Arctic. (On that day, it rained here in Tromsø too.) And there may be even more to what’s going on. There is some evidence that global warming is counter-intuitively linked to outbreaks of frigid winter weather in North America and Europe. The theory was spelled out in detail

for general audiences in a New York Times op-ed column in 2010 by one of its chief proponents, Judah Cohen

. In a nutshell, here’s how it works: A warmer climate has resulted in a significant reduction in Arctic sea ice in summer and fall. The greater extent of open water exposed to the sun in summer absorbs more energy, and then causes more water vapor to wind up in the atmosphere above it during the fall. Like a lake effect snow that happens downwind of the Great Lakes, more snow tends to fall in parts of Siberia as a result. And that, in turn, disrupts the jet stream in such a way as to send Arctic air plunging into North America and Europe. Or so the theory goes. It is still an active area of research. Meanwhile, back here in Tromsø, on any given day during the cold season there is a 70 percent chance that precipitation will fall

. Not surprisingly, it usually comes as snow. But the city has a January climate closer to that of Boston than the North Pole, with high temperatures averaging in the upper 20s. For this, the roughly 70,000 residents of Tromsø can thank the warm Norwegian Current

, a tongue of the Gulf Stream. Moreover, the locals insist that rain during winter is not unheard of. And statistics bear them out. On those days when precipitation falls during the cold season, 10 percent of the time it comes as rain. But so far it has rained on 50 percent of the days that I have been here. So one thing is a bit clearer than the precise causes of the umbrella weather here and the parka conditions further south: On my way to dinner tonight, I will definitely be bringing an umbrella.