Pollution: Made in China

The U.S. can take credit for about 21 percent of China's emissions due to exports. 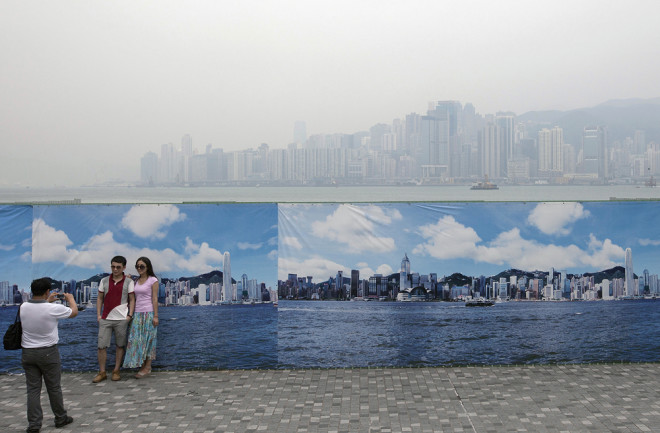 Tourists visiting Hong Kong in August pose before banners (originally used to hide construction) depicting the skyline on a clear day. Many people opt to take photos with this background instead of the actual smog-filled view of the city. | European Pressphoto Agency

China is the undeniable global leader when it comes to human-made air pollution, and a recent report reveals just how much of its smog is a byproduct of outsourcing from other countries.

An international team of researchers analyzed economic and environmental data from 2000 to 2009 and found that production of goods for export in 2006 alone accounted for between one-fifth and one-third of China’s air pollution, depending on the pollutant. And the U.S. can take credit for about 21 percent of those emissions, according to the report in Proceedings of the National Academy of Sciences.

Since America has shipped manufacturing overseas, many factories in the eastern half of the U.S. now sit idle, and air there is cleaner than it would have been. But thanks to prevailing winds that waft over the Pacific, the U.S. pays for its cheap-goods obsession via air quality on the West Coast. On a daily basis in 2006, as much as 11 percent of airborne soot in the western U.S. and up to 24 percent of sulfate concentrations were made in China.