Polar bears filmed themselves while hunting seals on sea ice, revealing why they are so at risk from global warming 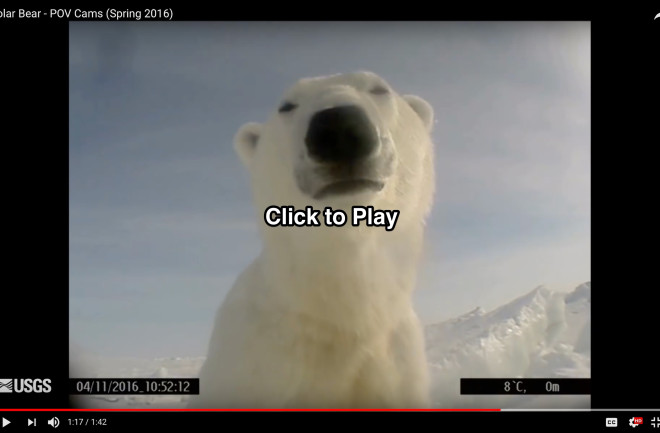 Click to watch a video captured by a point-of-view camera attached to a female polar bear by scientists studying polar bear behavior and feeding rates. (Video credit: Anthony Pagano, USGS) As with our planet as a whole, if you want to know the fate of polar bears in a warming world, you need to follow the energy. For the planet, researchers have been doing just that by keeping track of how carbon dioxide and other greenhouse gases we emit into the atmosphere have been tipping the climate's energy balance toward more and more warming. And the high north where polar bears live has warmed faster than any other region on Earth, resulting in shrinking sea ice and a cascade of other environmental impacts. Among those impacts: pressure on populations of polar bears. These majestic animals use sea ice as a platform from which to hunt their fatty, energy-dense prey: seals. And as the sea ice has shrunk, polar bear populations in some areas have declined. Now, findings from polar bears equipped with high-tech collar cameras show that the animals are even more vulnerable to warming than previously thought. With the cameras, as well blood sampling and other techniques, the researchers were able to follow the polar bear energy: Specifically, how much energy nine free-ranging female polar bears got from their prey, and how much energy the animals had to expend while roaming the sea ice in the Beaufort Sea off Alaska. In this region, where Arctic sea ice declines have been among the most rapid, the polar bear population has declined by about 40 percent over the past decade. In a paper published Thursday in the journal Science, the researchers report that the polar bears have significantly higher metabolic rates than previously thought — meaning they consume more energy. At the same time, five of the bears in the study were not able to catch enough seals to supply their energy needs. These animals lost weight during the period that they were observed. The video collar data was essential for monitoring the bears’ hunting behavior and foraging success. "Bears used sit-and-wait tactics to hunt seals 90 percent of the time, and stalking comprised the remaining 10 percent of hunts," write the study's authors. Make sure to click on the screenshot at the top of this post to watch up-close-and-personal video of these and other behaviors — including encounters between two bears, and swimming beneath the sea ice. "We've been documenting declines in polar bear survival rates, body condition, and population numbers over the past decade," says lead author Anthony Pagano, a Ph.D. candidate at the University of California Santa Cruz, quoted in a press release. "This study identifies the mechanisms that are driving those declines by looking at the actual energy needs of polar bears and how often they're able to catch seals." Pagano is also a wildlife biologist with the U.S. Geological Survey.

Paleoclimate reconstructions of atmospheric carbon dioxide concentrations, Arctic sea ice extent, air temperature, and sea surface temperature. (Source: Arctic Report Card) The National Oceanic and Atmospheric Administration's 2017 Arctic Report Card found that the current rate of Arctic warming is unprecedented in at least the past 2,000 years. And the pace of Arctic sea ice loss experienced in the past few decades has not been seen in at least the past 1,450 years. In the Beaufort Sea, as elsewhere in the Arctic, spring break-up of sea ice and its retreat toward the north is occurring earlier and earlier. Moreover, even where the ice remains, it is becoming increasingly fragmented. This means polar bears have to travel farther during spring — the key period when they do most of their hunting and put on most of their weight — to find the seals they prey upon. With the arrival of summer, the bears enter a fasting period. This doesn't end until fall, when the sea ice returns to the continental shelf areas close to the shore. But this fall freeze-up is occurring later than it once did, meaning the bears have to wait longer until they can begin to eat again. The research by Pagano and his colleagues, as well as previous work by other scientists, suggests that as sea ice becomes increasingly fragmented and short-lived year by year, polar bears are likely to experience more and more stress — and to die in ever greater numbers — leading to continuing declines in their populations. Note: I've just returned from the Arctic Frontiers conference held in Tromsø, Norway. I did a lot of reporting while I was there, so in the coming days and weeks, I'll be posting a number of stories on Arctic climate issues.