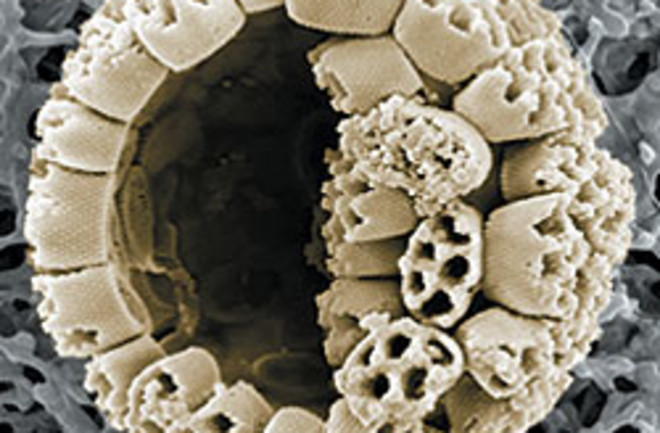 By definition, plankton are waterborne animals or plants that cannot swim against an ambient current. For the most part they float, although some can maneuver as long as they “go with the flow.” Phytoplankton are single-celled plants. The largest can be divided into three groups: coccolithophorids, diatoms, and dinoflagellates. The exterior of the coccolithophorid at right, a Syracolithus quadriperforatus, is made of calcium carbonate, the stuff of chalk. By contrast, the shell of the diatom Cyclotella pseudostelligera is silica, the material that makes up sand, glass, and quartz. Coccolithophorids and dinoflagellates are largely marine plants, meaning they live in salt water. Diatoms exist in both fresh and brackish environments. The oldest diatom fossils are about 140 million years old, leading some scientists to speculate that they evolved along with the ascent of terrestrial grasses, which released silica into the sea after separating it from minerals. | SEM scan courtesy of Markus Geisen

When 19th-century British biologist Thomas Henry Huxley first put seafloor mud under a microscope, he found tiny round and oval particles in abundance. Not knowing what they were, he dubbed them coccoliths, based on the Greek words for “seed” and “stone.” Only later would scientists learn that coccoliths are calcite plates that surround some species of phytoplankton like armor. Today, more than 100 years after Huxley, teams of researchers are still unraveling the role phytoplankton play in creating the air we breathe, the food we eat, the fuel we burn, even the ground we walk on.

Phytoplankton can be found floating in just about every ocean, lake, and river in the world. But scientists are looking mostly at saltwater species, which, taken together, may have influenced life on Earth more than any other group of organisms. Plankton are literally at the bottom of the food chain, a source of nourishment for virtually every animal in the sea. They are ancestors to terrestrial plants, which seem to have evolved from certain ocean phytoplankton hundreds of millions of years ago. They remove carbon dioxide from the atmosphere—producing oxygen through photosynthesis and, in another process, forming the calcite plates that Huxley found so interesting. Over the eons, layer after sedimentary layer of coccoliths created such landmarks as the White Cliffs of Dover. And the organic carbon in phytoplankton cells plays a major role in today’s global economy. “Over hundreds of millions of years, these organisms have rained down onto the seafloor,” says Paul Falkowski, a Rutgers University biological oceanographer. “A small fraction has been buried and become oil.”

Scanning electron microscope (SEM) images of the three main groups of large phytoplankton—diatoms, dinoflagellates, and coccolithophorids (those with coccolith shells)—show that they can be arrestingly beautiful. Coccoliths are not always round, flat plates, like hubcaps; many look like trumpets, cabbage leaves, daisies, or stars. Diatom exoskeletons, made of silicon dioxide, sometimes seem like tiny, ornate pillboxes, with one half fitting into the other half. Some look like mandalas. Dinoflagellates can look like anything from dimpled pollen grains to minuscule ship anchors. Whatever their specific form, the hard shells of these tiny creatures seem to have the same purpose: protection. It’s a plankton-eat-plankton world down there—a “watery arms race” says German biogeologist and electron microscopist Markus Geisen—with much of the eating done by zooplankton, a notch up the food chain.

Despite their diminutive size, phytoplankton can proliferate. When conditions are right, they grow into enormous “blooms” that are so large they can be seen from space. The coccoliths of one species, Emiliania huxleyi—named after Huxley—reflect sunlight, turning thousands of square miles of water white or aqua. Other widespread population buildups can be toxic—as in May when a bloom of dinoflagellates covered nearly 4,000 square miles off China with a so-called red tide that killed off millions of fish.

In the late 1980s, scientists on both sides of the Atlantic began large-scale, multidisciplinary studies that started with Emiliania huxleyi and expanded to include the global, long-term dynamics among coccolithophorids, dinoflagellates, and diatoms. Of particular concern to researchers is the impact of global warming and how it could affect phytoplankton populations. Any massive, long-term changes in their numbers could alter fish migration patterns, growth rates, and mortality, as well as change the amount of oxygen and carbon dioxide in the atmosphere. And that could, of course, affect us all.

These scanning electron microscope images of coccolithophorids were all taken by Markus Geisen of the Alfred Wegener Institute for Polar and Marine Research in Bremerhaven, Germany. Geisen is one of dozens of European scientists who recently completed an extensive investigation, called CODENET, of the biology and the ecological relationships of several coccolithophorid species. “These unbelievably small creatures create unbelievably elaborate crystals,” says Jeremy Young, a micropaleontologist at the Natural History Museum in London. “The more striking they are, the better is the evidence they have important biological functions.”

This coccolithophorid, an Algirosphaera robusta, was harvested from the Alborán Sea in the western Mediterranean. It has two tiers of armor: a petal-like arrangement of vertical plates overlying an interior layer of ribbed oval disks.The center area is where a tiny flagellum will grow, allowing it some mobility but not against a current. Despite its many parts, the entire organism is a single cell of only about 10 microns in diameter, which is smaller than most cells in the human body. To bring out specific structural features, the coloring was digitally added by biogeologist and electron microscopist Geisen, who captured this image in 2000.

Diatoms are a favorite tool among ecological and evolutionary researchers because their hard silica shells are often well preserved—and they have been found in virtually every type of water body on Earth, both fresh and salt, from oceans to farm ponds, from the Great Lakes to the West African coast. Some diatoms can even be found in moist rocks, soils, and bark. Many diatoms like Biddulphia laevis, Actinocyclus, and Skeletonema punctatum are called centric diatoms, meaning they are symmetrical around a single point. Dinoflagellates like Peridinium furca are best known for two transparent whiplike flagella—one that encircles the body, the other arising from between the two points. Dinoflagellates are also known for their diversity. They come in many forms. Some exist by photosynthesis, some by eating other organisms. Some produce their own light, like fireflies. Some become parasites in fish and other aquatic organisms. Some emit toxins that can paralyze or kill such shellfish as clams, mussels, and oysters and can adversely affect the food chain all the way up to humans.

Pull a bucket of water from anywhere in any ocean and several million specimens of Emiliania huxleyi (top left) could very well be floating inside. They are the most common of coccolithophorids, single-celled plants with overlapping plates called coccoliths, which are apparently used for protection. Other coccolithophorids, like Calcidiscus quadriperforatus (top center), also have discuslike plates, but coccoliths can take many forms. The Discosphaera tubifera (top right), for example, surrounds itself with what appear to be trumpets, making it seem much bigger than it actually is. The specific forms of each coccolith most likely evolved under pressure from zooplankton, the microscopic animal group a notch up the food chain that developed mandibles, claws, and other accoutrements for getting past the hard calcite coccoliths. Some coccolithophorids may develop symbiotic relationships with diatoms. For example, plates from the unusual Reticulofenestra sessilis (bottom) form a phytoplankton association with Thalassiosira, a diatom. Just what benefit the two confer on each other—if any—is unknown.