Scaling up waste-to-energy technology could transform the hog farming industry. 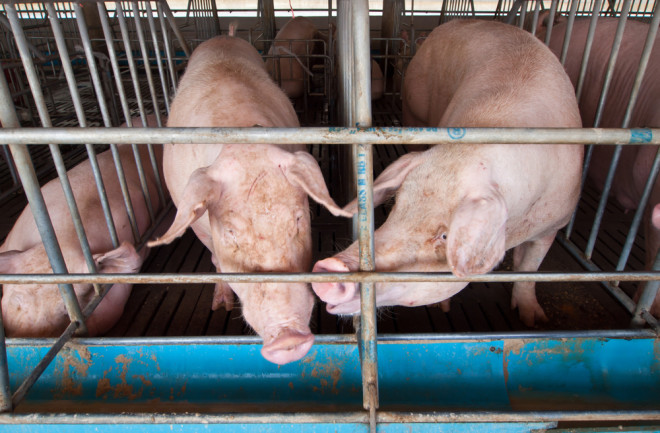 From the road, the sprawling site looks like a typical concentrated animal feeding operation, or CAFO, with nine elongated metal barns housing nearly 9,000 hogs and an open lagoon that stores liquefied manure. But next to the lagoon is a bizarre basin covered by an inflated tarp: the biodigester. Every week, this swollen structure turns 400,000 gallons of liquid hog waste into biogas that fuels the farm.

Loyd Ray Farms is the first to tap a new energy market created under North Carolina’s unique renewable energy law, which took effect in 2012. Whereas many states have renewable energy laws requiring utility companies to harvest a percentage of their energy from solar or wind power, North Carolina is the only one requiring power derived from hog or chicken manure. Loyd Ray Farms has been turning its animal waste into biogas since 2011. The fuel generates renewable energy and allows the owner to sell carbon offset credits. After this successful pilot project, which attracted investments from a regional power company and Google, researchers are now looking to help other farms follow suit and expand the market for waste-to-energy systems on a national scale.

Before its upgrade, Loyd Ray Farms was a classic “feeder-to-finish” operation, bulking up thousands of swine for slaughter every year. These large, confined hog facilities spread rapidly through North Carolina in the 1980s and 1990s. But during this heyday, heavy rains caused several manure lagoons in the state to rupture; public outrage swept the country as pathogen-laden sludge leached into waterways.

Meanwhile, researchers were showing that besides soil and water contamination, hog CAFOs emit high volumes of the potent greenhouse gas methane (pound for pound, hog manure produces twice the methane of cattle manure) and ammonia, which has been linked to respiratory ailments. Farmers exacerbate these health hazards when they spray the liquid manure onto their fields as fertilizer, volatizing more chemicals and producing an ungodly stench.

Seeking to redeem its hog industry, the Tar Heel State imposed a temporary ban on new or expanded hog farms in 1997. A decade later, the state signed the ban into law but exempted farms that met strict environmental criteria, such as eliminating the discharge of animal waste to groundwater and preventing the release of pathogens to the environment.

In 2007, with this new environmental law in place and the renewable energy law under consideration in the state Legislature, environmental scientists at Duke University seized the opportunity to reimagine swine farms. They teamed up with Duke Energy, North Carolina’s largest utility, to convert a standard hog CAFO into a sustainable farm. Engineers from Cavanaugh Solutions designed a system that would turn the animal waste into energy. Soon, Google got wind of the project. With its well-known corporate commitment to reduce the carbon footprint of its operations to zero, Google’s top brass saw investment in the project near its Lenoir, N.C., data center as a step toward achieving that goal. All the group needed was a factory farm to test the technology.

When a project manager approached Loyd Bryant with the blueprints in 2009, the owner of Loyd Ray Farms was up for experimenting. “I liked the idea of reducing odors on the farm, which I knew my neighbors would appreciate. I liked the idea of having healthier pigs from the ammonia control, which helps them grow better and reduces mortality. And I liked the idea that I might be able to expand my farm someday because of this innovative system,” Bryant explains.

A Day on the Farm

Now Bryant’s daily chores include flushing 80,000 gallons of manure from two barns into the farm’s biodigester, a 174-by-218-foot plastic-covered pit. Inside, anaerobic bacteria — which do not require oxygen — silently convert the organic matter into methane, carbon dioxide and other chemical byproducts. Bryant’s biodigester mixes the liquid inside to keep digesting bacteria in constant contact with the waste material. This maximizes digesting efficiency and helps the bacteria outcompete pathogenic strains, reducing pathogen loads without the use of synthetic chemicals.

At the other end of the digester, Bryant captures biogas composed of about 60 percent methane and 40 percent carbon dioxide. A machine called a gas skid brings this mixture to the right temperature and pressure for turning a 65-kilowatt microturbine. The electricity it generates is enough to run the waste treatment system plus the lights and machinery in five of Bryant’s nine hog barns. Any excess biogas is burned in a flare that converts methane into less-polluting carbon dioxide.

Manure in the barns is flushed into the biodigester. Here it produces biogas to fuel a microturbine. The remaining effluent is aerated so it can be used to irrigate fields and flush barns again.  | Discover After Marc Deshusse/Duke Carbon Offsets Initiative

The leftover liquid waste is routed to an aeration basin where nitrogen-fixing bacteria convert ammonia to nitrate. Some of this “manure tea” is used to flush out the barns. Bryant sprays the rest on his fields in place of the less-treated manure he used to use. Since the treated effluent tea has far less ammonia, it produces less fumes and odors, which Bryant’s neighbors have been quick (and happy) to note. Also, plants take up the tea faster than manure because their roots can absorb nitrates directly and more easily than ammonia.

Preliminary estimates indicate the converted farm prevents the production of greenhouse gases equivalent to 5,000 metric tons of carbon dioxide a year — like taking some 1,000 cars off the road. This allows Bryant to provide renewable energy credits to Duke Energy and carbon offset credits to both Google and Duke University, in exchange for their initial investment in upgrading his farm. When the existing contract expires in 2020, Bryant can sell those credits on the open market, as could any farmer who implements a similar system.

For Google, the project is an investment into a possible future, not a slam dunk with immediate payoff. “Less than 1 percent of our carbon emissions are offset by this,” says Jolanka Nickerman, manager of Google’s Carbon Offsets Team. Buying into the waste-to-energy project was an opportunity to help transform an industry to benefit the environment, business and local communities. “It was win-win-win,” says Nickerman. Now the challenge is spreading and scaling that technology to make it a viable means of offsetting more carbon.

The Loyd Ray Farms project was a learning process. In the summer heat, for example, the system didn’t produce enough energy to power the biodigester’s electrical system while also cooling the hog houses, so managers had to shift the operational schedule to balance the electrical load. When a plastic basin liner was installed wrong, managers had to put in a new one. Plus, the original gas skid needed to be replaced because it could not handle the sulfur dioxide contained in the biogas.

Despite these setbacks, analyses of the Loyd Ray experiment show that electricity generated from swine waste is competitive in the renewable energy marketplace. Getting new projects off the ground will likely hinge on the cost to farmers, says Tanja Vujic, who directs the project at Duke University. Environmental safeguards, like Bryant’s aeration basin and plastic basin liners, are necessary but expensive because they lack financial incentives. Vujic expects prices to come down as more waste-to-energy systems are studied, tested and implemented. With Bryant’s farm as an example of success, Vujic hopes other farmers will see payments for energy and carbon offsets as a way to finance conversions on their own farms.

Bryant acknowledges “there have been some kinks in the system.” But, he says, “I know it works and makes my farm better. It practically runs itself.”

[This article originally appeared in print as "Pig Power Pays Off."]