Bluefin tuna are bearing radioactive cesium across the ocean from Japan. Are other creatures doing the same?

Petridish.org is a crowd-funding site for science. Here, we're featuring one of our favorite Petridish projects. To fund this project, or to see more projects, go to Petridish.org.

In 2011 we tested 15 Pacific bluefin tuna, known migrants from Japan, for radioactive cesium from Fukushima. Every fish tested carried radiocesium across the Pacific Ocean. What other Pacific species are transporting radioactive materials to distant ecosystems?

We will test albacore tuna, swordfish, yellowfin tuna, salmon sharks, blue sharks, mako sharks, opah, seabirds, turtles, and whales from regions as diverse as New Zealand, Alaska, Hawaii, North America, and Mexico. We'll then have a clearer picture of just how far, and just how much, radiocesium from the Fukushima spill these animals were able to transport.

We want you to pick an animal! Indicate what you are interested in, whether it be sharks, albacore tuna, or loggerhead sea turtles. We will update you on progress for your animals of interest.

Next Page: Why This Research Matters 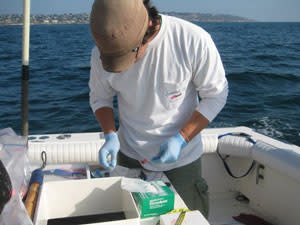 Why this research matters

Our project answers two major questions. First, is there radiocesium in popular food fish, and from what regions? The public response to the radiocesium in Pacific bluefin made it clear to us that, even though levels were low, consumers want to know what is in their fish.

Secondly, which animals, in different regions, migrate from waters near Japan? Your support will help us better understand the movement patterns of some of the most difficult to study animals in the ocean.

I'm a graduate student at Hopkins Marine Station of Stanford University, finishing up a Ph.D. program. My research has focused on the migrations of animals that use the deep blue waters, away from the continental shelf (pelagic animals). In the endless blue ocean in 2006, I came upon large 150 lb sailfish feeding at the surface. I wondered: what brings these animals to certain places at certain times? How do they make a living in the open ocean? This project ties into that question, as it is the incredible migratory nature of these animals that allows them to pick up radiocesium and transport it thousands of miles away to distant ecosystems.

There are many here. We will find out which fish, especially ones consumed, carry radiocesium. This will demonstrate for the first time the extent to which a diverse set of animals can transport radioactive materials.

Also, radiocesium in animals could demonstrate for the first time their migration from waters around Japan. Discoveries of the first documented trans-Pacific journeys in some animals are possible.

What your money can do

This project is highly collaborative with over 15 scientists involved. But getting samples of these animals costs money. Sometimes we need to get to a place to sample; in other cases, tissue must be shipped from as far as New Zealand or Hawaii. Your contributions ensure that we get the sample size we need to draw conclusions on each study animal.

Our target of $20,000 allows us to do a comprehensive study of 4-5 species. Every dollar above that amount lets us examine MORE species. So if we reach our target, but you are interested in supporting our research, PLEASE do not hesitate - the more funding we receive, the better job we can do to examine as many candidate species as possible.