A major bleaching event started in 2014, and has since affected 67 percent of coral reefs around the world. 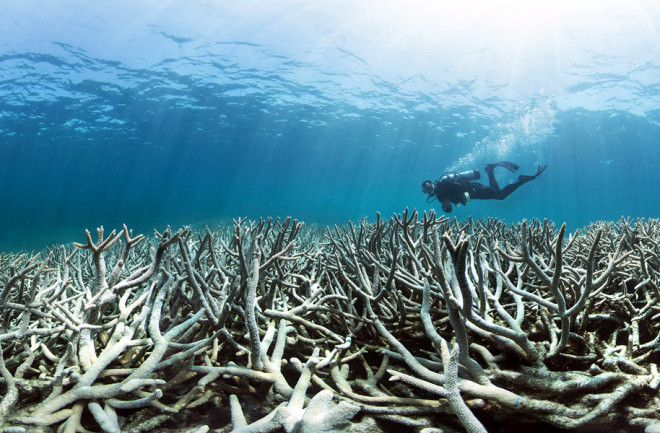 A diver examines coral near Heron Island in the Great Barrier Reef in February. The site was one of the first to bleach. | XL Catlin Seaview Survey

Some of the bone-white marine invertebrates were still alive at that point. Heat merely caused them to expel the colored, microscopic algae that live inside them and provide food. But as the heat wave stretched from days to weeks, Coral Sea temperatures spiked more than 3 degrees Fahrenheit above normal, and many corals succumbed to starvation or disease. By May, 35 percent of the northern and central reefs’ corals were already dead or dying.

The scale of death “was just absolutely phenomenal,” says Mark Eakin, who coordinates reef monitoring for the National Oceanic and Atmospheric Administration. “This is the longest global bleaching event we’ve ever recorded.”

The bleaching began in mid-2014 and eventually affected 67 percent of coral reefs worldwide. Scientists expect it to wind down by early 2017, as global temperatures recede after three successive years of record heat. The surviving corals should slowly recover, but they’ll be more vulnerable to disease and less likely to spawn. And long-term warming trends will make bleaching events more common and more severe in the coming decades. Says Eakin, “Things have changed. The ocean has changed.”