Antibiotic use on the farm hurts people—and doesn’t help the bottom line.

Donald Ross, a poultry worker in Virginia, nicked his finger one day on the job. The subsequent infection ballooned into a lesion so unresponsive to antibiotics that it had to be surgically removed, according to a report in the Baltimore Sun. Poultry workers spend their days feeding birds, transporting and weighing them, and then hanging them on hooks, slaughtering, and packing them. Often they do not wear gloves or protective clothing while they do this messy work, and bird feathers and bits of fecal matter can piggyback on their clothes and shoes. Chances are they bring home dangerous bacteria, the kinds that are resistant to antibiotic treatment.

An estimated 70 percent of all antibiotics sold in the United States—more than 24 million pounds every year—are used on farms, mostly in animal feed. Health researchers have long worried that this heavy load of antibiotics is causing strains of bacteria to evolve that are impervious to the drugs. Farmers have justified their practice on the grounds that antibiotics help fatten up the birds, thereby increasing profits. But a groundbreaking study by Johns Hopkins Bloomberg School of Public Health pulls the rug out from under this argument.

Using data collected by Perdue poultry farms, Hopkins researchers calculated that Perdue lost $.0093 per broiler chicken when using antibiotics. For each dollar spent on antibiotic feed additives, the return was less than 10 cents. “We were surprised to find no measurable benefit and actually a business loss,” says Ellen Silbergeld, professor of environmental health sciences at Johns Hopkins and one of the authors of the study. Julie DeYoung, vice president for corporate communications at Perdue, claims the data that Johns Hopkins examined were not designed to evaluate the economics of antibiotic use. At the very least, though, the Hopkins study establishes that feeding antibiotics to chickens in low, uncontrolled doses provides no clear economic benefit. 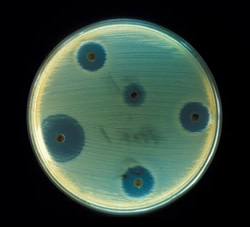 So how did the poultry industry get hooked on drugs that are dangerous to the health of both humans and companies? Blame an overreliance on conventional wisdom. In some studies from the 1950s, animals were found to gain more weight faster when given low doses of antibiotics in their feed. It is highly likely that other factors, like improved breeding, management, and feed formulation, also played a role in spurring the growth of poultry. Nevertheless, the vast majority of antibiotics used on farms today are added to animal feed solely to stimulate growth.

The consequences are clear. The FDA estimates that about 70 percent of all infection-causing bacteria have become resistant to at least one of the drugs most commonly used to treat infections. Bacitracin, erythromycin, neomycin, streptomycin, tetracycline, and more than 10 other antibiotics, representing all the major classes of clinically important therapies commonly used in human medicine, are approved by the FDA for use in chickens and turkeys. Quinupristin-­dalfopristin was licensed for use on farms in advance of clinical approval. The result was that resistance to the drug emerged even before it could be used to fight infectious disease in human beings.

The story gets worse. Bacteria share DNA with other organisms with which they come into contact, so an antibiotic-resistant gene can transfer from one type of bacterium to another, and a bacterial cell can become resistant to numerous antibiotics at once. Employees in the poultry industry typically work without protective equipment in dusty spaces crowded with thousands of birds; heavy antibiotic use in those conditions creates a paradise for the emergence and spread of these multiantibiotic-resistant bacteria.

Poultry are already a leading source of Salmonella and Campylobacter infections in humans. If a person ingests chicken contaminated with Salmonella that is resistant to ciprofloxacin and amoxicillin, not only will the Salmonella itself be difficult to treat, it will share its resistance with other bacteria in a person’s body. If the same person later comes down with strep throat, ciprofloxacin and amoxicillin may be ineffective to treat it.

Resistance to antibiotic cures for Campylobacter, Salmonella, and other food-borne pathogens is increasing. Untreatable strains of Enterococcus and Staphylococcus aureus in intensive care units are also on the rise. Over one five-year period in the 1990s, the rate of penicillin resistance increased by 300 percent, while cefotaxime resistance grew by more than 1,000 percent. The annual cost of antimicrobial resistance in Staphylococcus alone has been estimated at $122 million.

Unsafe for humans, a drain on health-care resources, and not even profitable: It’s time for companies like Perdue to kick the antibiotic habit so we can all be better off.