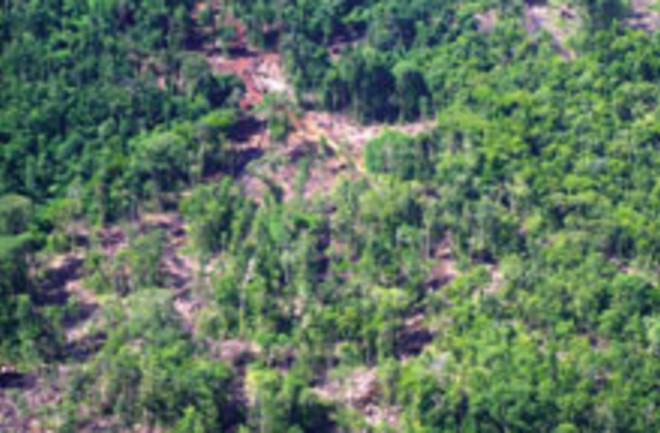 You may not spend much time contemplating the benefits bestowed on the planet by Papua New Guinea's vast tropical rain forest -- in fact, you may be only vaguely aware of the island nation's existence. But it's down there in the Pacific Ocean, just above Australia, quietly hosting an estimated 6 percent of the world's species in an area that accounts for less than .5 percent of the Earth's land. Now, a thoroughly alarming study shows that 15 percent of the rain forest had been cleared by 2002. Researchers say that if deforestation continues at the present rate, half of the forest could vanish by 2021. And if the trees go, so will many of the unique species found in this biodiversity hotspot. Researchers studied recent satellite images of the forest and compared them to maps dating back to 1972, giving them an in-depth look at where the tree canopy had receded. The report [pdf] from the University of Papua New Guinea shows that commercial logging and subsistence agriculture have already cut a wide swath through the rainforest, the third largest in the world.

Phil Shearman, lead author of the study by the University of Papua New Guinea and the Australian National University, said: "Forests are being logged repeatedly and wastefully with little regard for the environmental consequences, and with at least the passive complicity of government authorities." ... Shearman said: "For the first time we have evidence of what's happening" [The Guardian].

Papua New Guinea's government has advocated forest conservation methods, and has recently explored ways to reap an economic benefit through preservation. As global warming legislation forces nations into a growing carbon market where they can trade emissions permits or buy carbon "offsets," a carbon dioxide-absorbing rain forest becomes an asset.

[The government] backs the concept of Reducing Emissions from Deforestation and Degradation (REDD), which was considered at last year's global climate summit in Bali. Under the scheme, developing nations with large forested areas could be paid by industrialised countries not to cut down trees. The rich nations could then offset some of their own emissions against the carbon dioxide absorbed and stored by the trees that they paid to be protected from being felled [BBC News].

But there's an ironic twist. If logging in Papua New Guinea continues at the current breakneck rate, and if talks on international climate change legislation continue to creep along, there may not be much forest left to protect as an offset. The study showed that 80 percent of accessible forest -- i.e., not on steep mountainsides -- could be gone by 2021. Image: University of Papua New Guinea