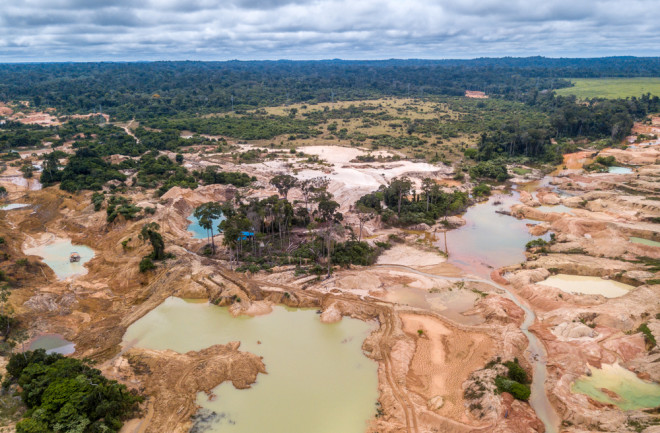 Deforestation in the Amazon. Some studies suggest that once 20 to 40 percent of the forest is gone, it could disintegrate entirely. (Credit: PARALAXIS/Shutterstock)

Climate change today is scary. Worsening storms, droughts, heat waves and wild weather patterns have begun disrupting life around the globe. But the changes so far have been largely manageable for most, and perhaps even reversible, with enough effort.

But the future could hold far worse, say a group of researchers Wednesday. Should warming advance far enough, it could trigger crucial "tipping points" in various environmental systems, throwing them into disarray and kicking off a cycle of rapidly accelerated global chaos. And new research suggests that tipping points might loom closer than we thought.

A group of researchers from Europe, Australia and China argue that these impending tipping points should provide some extra motivation to curb climate change. Their rationale, laid out in an essay in Nature, explains that tipping points might have been misunderstood in the past. It also makes clear what might happen should we sail past the point of no return. “It’s a bit of a misery fest," says co-author Timothy Lenton, an earth scientist at the University of Exeter in the UK. “But it felt necessary to notify the risks we’re running.”

If climate change were to stop right now, some of the places most at risk could still be repaired. But, for our rainforests, coral reefs, tundras and more, there's a point at which they become so damaged that they will disappear entirely.

After different ecosystems reach their tipping point, their degradation might contribute to environmental harm elsewhere. As the Greenland ice sheet dumps more water in the ocean, it could make an already-slowing current drag even more. That would in turn delay monsoon season in West Africa and prolong the regional drought. Some, too, become worse all on their own. For example, as the Greenland ice sheet melts, it drops in elevation — and lower elevations are warmer and encourage more melting.

Some of these catastrophic losses appear to lie just around the corner, based on how much of the ecosystem has been lost already. The Amazon rainforest, for example, might start to disintegrate once 20 to 40 percent has been cut down. Already 17 percent of the rainforest has been destroyed since 1970. Other ecosystems could become sources of climate-altering gasses themselves if they break down: As permafrost tundras thaw, they release stored CO2 and methane.

The IPCC originally predicted these tipping points would only happen if Earth warmed by 5 degrees Celsius. But updated climate models now predict that the shift could happen after just 1 or 2 degrees of warming. For context, the Paris Agreement aims to keep global warming below 2 degrees — even though many nations are on track for at least 3 degrees of warming.

Climate change is already an inherently sluggish process, Lenton says. So when these processes pick up speed, reversing them is even more difficult. “When something is traveling under its own momentum, it’s hard to catch and reverse,” Lenton says. “You’d have to shove it hard, and that’s hard to do with the climate.”

After outlining all the ways ecosystems could fall apart, Lenton says he’s trying to focus more on “positive tipping points,” or the economic and social factors that push people into climate action. Maybe with more of those shoves, people and governments would do more to stop global warming. “We say it’s an emergency or big issue, but that doesn’t mean [people] think it is one,” he says. “If it was one, you’d act decisively.”