On the very day the bomb cyclone exploded, we learned that 2017 was one of the very warmest on record

One verdict on global warming in 2017 is in: Warmest year with no temperature boost from El Niño, and second warmest overall 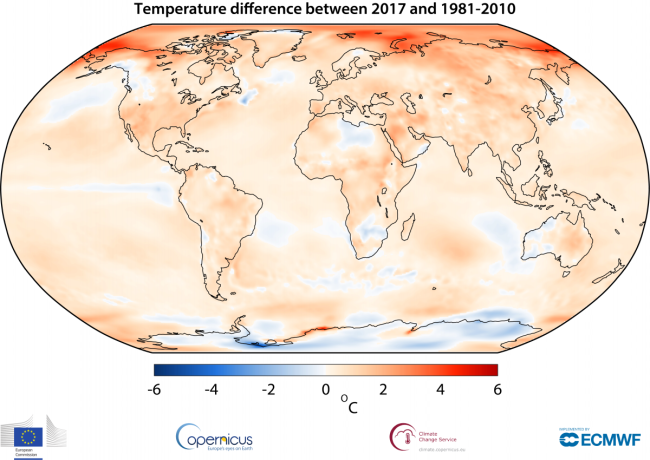 This map shows how air temperatures at a height of two meters varied in 2017 from the 1981–2010 average. (Source: Copernicus Climate Change Service, ECMWF) Today brought another lesson about the difference between weather and climate. While winds were howling, snow was blowing, and temperatures were plummeting thanks to the bomb cyclone off the U.S. East Coast, a European science agency announced that 2017 was the second warmest year in records dating back to the 1800s. Only 2016 was warmer, according to the Copernicus Climate Change Service. That year received a very significant temperature boost from a strong El Niño, which is characterized by high surface temperatures in the tropical Pacific Ocean. Among all years without an El Niño, 2017 was the very warmest in the Copernicus analysis. This finding is particularly noteworthy because 2017 saw cooling in the tropical Pacific from La Niña, the opposite of El Niño, both early and late in the year. The Copernicus findings are comparable to an independent analysis done by the Japan Meteorological Agency. In coming weeks, we'll also see analyses by NOAA, NASA, and the U.K.'s Met Office. Over the long run, these different independent analyses have produced very similar results, as this graphic shows:

SEE ALSO: The view from space as the so-called 'bomb cyclone' exploded into a dangerous storm

That said, there has been increasing discussion among climate scientists about how long-term warming might influence major winter storms, as well as other forms of extreme weather.

Sea surface temperature anomalies in the Western Hemisphere. Note the orange and red colors. In a nutshell, the theory goes like this: As temperatures rise more in the Arctic than in the lower latitudes, the jet stream weakens, gets more wavier, and tends to stay in this orientation for longer. This allows cold Arctic air to spill south more readily, and warm, moist air from the south to push north. When a cold, dry airmass runs into a warm, moist one, a cyclonic bomb can go off, just like the one off the East Coast. And when the clash happens over warm ocean waters, like it just did, the storm can get a moisture boost, leading to greater snowfall. In fact, sea surface waters from the Carolinas north into Canada are mostly warmer than average — in some places dramatically so. A few important caveats are in order here: First, the jet stream theory, advanced by Rutgers climatologist Jennifer Francis and colleagues, is just that — a theory. And while evidence has been accumulating to support it, it is still a contentious area of science with many researchers not yet convinced. Second, even if this theory offers a reasonably accurate picture of what's going on, it would be wholly incorrect to say global warming "caused" the East Coast storm. Today, it is going by the term "bomb cyclone." But this type of storm, known as a Nor'easter in years past, has a long and storied history. Long-term residents of the New England coast are well familiar with these damaging extreme weather events. Over time, will events like this become stronger as the world warms? Possibly, scientists say. And then there's the question of how much stronger. The bottom line is that this is an area of active inquiry. And we just don't have all the answers. But this much is clear: The world is warming, humans are primarily to blame, and the trend has reached new heights in the past few years.