On the Verge of Another Extraordinary Greenland Meltdown? 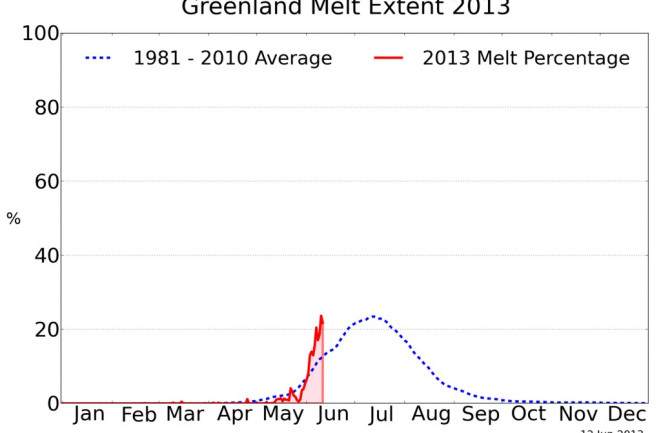 More than 20 percent of Greenland's vast ice sheet is now experiencing some degree of melting of snow and ice at the surface. On average, this degree of melting does not occur until July. (Graph: National Snow and Ice Data Center's Greenland Ice Sheet Today) Last summer, melting of surface snow and ice in Greenland went down in the record books as being far more extensive than that seen in any year since satellite records began in 1979. At one point, during a spate of extraordinarily warm weather, 97 percent of the Greenland Ice Sheet experienced some degree of surface melting. It's still too soon to say exactly what this year will ultimately bring. But so far, the early part of the warm season in Greenland is looking eerily similar to what happened last year. Check out the graph at the top of this post from the National Snow and Ice Data Center's web page on the state of the Greenland Ice Sheet: The red line shows the percentage of the ice sheet experiencing melting, month by month; the blue line shows the 1981 to 2010 average. Already, surface melting is occurring on 20 percent of the ice sheet. As is evident from the graph, that degree of melting does not typically occur until July. And check out how this year's graph looks in comparison with that of last year:

The geographical extent of surface melting in Greenland (red) compared to average (blue). (Image: National Snow and Ice Data Center Greenland Ice Sheet Today. The onset of significant surface melting appears to have come a little later this year compared to last. That said, surface melting has spiked well above average early in the season, just as it did last year. Time will tell whether we're headed again to an another extraordinary Greenland melt season. But as Ted Scambos, lead scientists for the National Snow and Ice Data Center research team, put it to me in an email on Thursday, "The current pattern is generally similar to last year's record-year pattern. So [a repeat] is plausible. Moreover, in the last week or so, conditions have been quite warm in Greenland relative to the norm." How reliable are these calculations? Earlier this year, the NSIDC announced that the algorithm it used to make its calculations had been over-estimating the extent of surface melting in Greenland. Until that point, it looked like significant melting was occurring in February and March, when it fact it was not. Scambos says he and his colleagues are fairly confident that they've fixed the problem. "I agree that it bears watching," he says. "But in fact I think we have it on track now." A different approach to calculating the melt extent would be helpful as a comparison, he says. And, in fact, another scientists has been working on just such an algorithm. It's just not ready for prime time yet.