On the Edge Redux 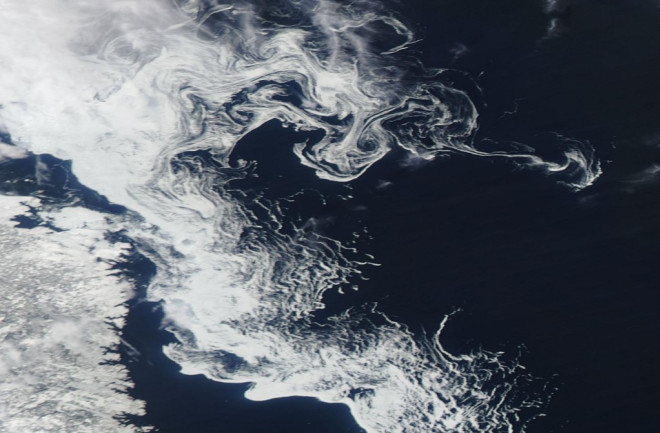 An image captured by NASA's Aqua satellite reveals swirls of sea ice off Newfoundland on April 24, 2013. (Image: NASA) Earlier this month, I posted a satellite image showing the filagreed edge of sea ice between Canada and Greenland. Here's another one, this one off the coast of Labrador. The swirling eddies and filaments reflect movement of water associated with the cold Labrador Current, which flows south from the Arctic Ocean, along with upwelling of water driven by winds blowing across the surface, and differences in ocean temperature and salinity. As seen from space, the tracery at the melting edge of sea ice is beautiful. From an airplane, it can appear downright dramatic, as seen in this photograph of gigantic icy whirlpools just east of Labrador's Belle Isle:

Sea ice swirls in the Labrador Current on April 8, 2008, as seen from a flight from London to Chicago. (Image: Courtesy Daniel Schwen) The extent of sea ice off Labrador yesterday was roughly equal to the median extent between 1979 and 2000, according to the daily update from the National Snow and Ice Data Center. But overall, the extent of Arctic sea ice is below the long-term average.