On Islands, Tons of Plastic Trash Is Likely Buried Beneath the Sands

Plastic trash like bottles and shoes cover the surface of a remote island's beach. But the bulk of the debris lies where we can't see it. 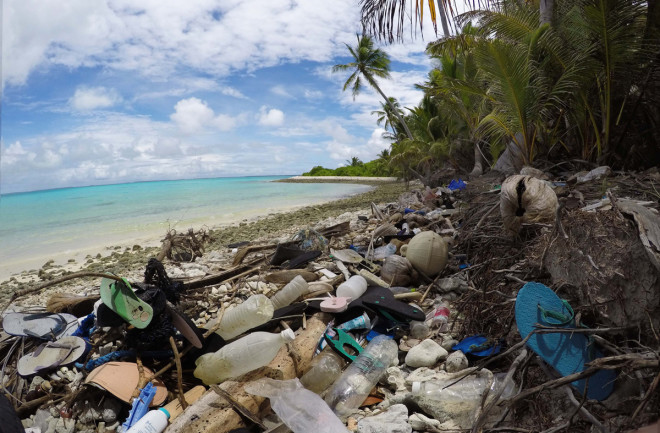 We all know our plastic problem is out of control. So far, humans have produced more than 8.3 billion metric tons of plastic, and that number is only growing. Now, a new study in Scientific Reports claims that the problem goes deeper than we thought — literally.

An Australian team of researchers traveled to the Cocos (Keeling) Islands (CKI), a remote archipelago in the Indian Ocean that’s roughly 1,700 miles off the northwest coast of Australia. There, they surveyed beaches on seven of CKI's 27 islands. Those seven accounted for nearly 90 percent of the archipelago's landmass.

Even looking at just a fraction of beaches, the researches still managed to find over 23,000 pieces of manmade debris, weighing a total of 213 pounds. The bulk of this debris — 95 percent — was made of plastic. Some of those items included flip flops, plastic bags, drinking straws and lids and caps. But 60 percent of their total haul consisted of micro-debris measuring 2-5 millimeters.

The real kicker, though, is that most of this trash isn’t even where we can see it. Depending on the survey site, between 10 to 70 times more debris was found below the surface — up to 10 centimeters deep — compared to the trash they could see.

(Source: “Production, use, and fate of all plastics ever made,” Science Advances, 2017. Credit: Alison Mackey/Discover)

Perhaps even more troubling, based on these findings, the team extrapolates that there are approximately 414 million pieces of manmade debris on CKI, weighing in at over 200 tons. And the researchers estimate 93 percent of those 414 million pieces are buried, likely in the form of micro debris.

It’s a sobering thought, that our trash can travel and burrow to such a degree. So, how to tackle such an enormous and embedded problem?

“In the absence of meaningful change,” the authors write in their report, “debris will accumulate rapidly on the world’s beaches.” And just trying to remove the trash won’t be enough. “With an estimated 2,000 oceanic islands worldwide, and thousands of new plastic items washing up on remote beaches every day,” they continue, “clean-ups cannot keep pace … prevention is key.”

Without approaching the issue from multiple angles — like banning single-use plastics and enacting waste management practices that keep our trash from spreading — the world will inherit our trashy legacy.