On Hurricane Katrina's Anniversary, a Map of Tropical Cyclones Back to 1842 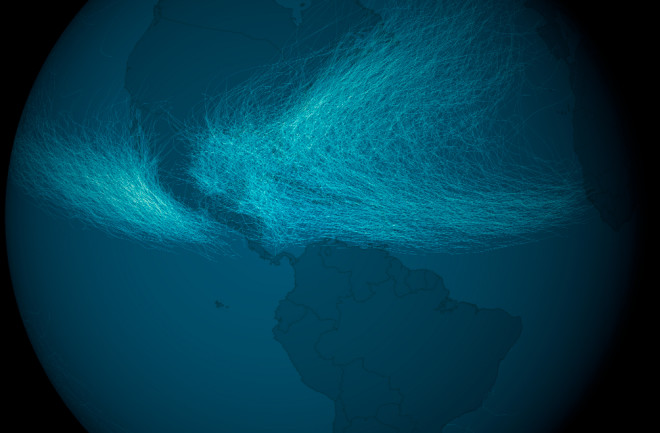 A map of Atlantic cyclone tracks from 1842 to 2012. (Image: NOAA) Today marks the eighth anniversary of Hurricane Katrina's landfall in Louisiana. As the official National Hurricane Center report on the storm put it:

Katrina was an extraordinarily powerful and deadly hurricane that carved a wide swath of catastrophic damage and inflicted large loss of life. It was the costliest and one of the five deadliest hurricanes to ever strike the United States

All told, 1,833 people lost their lives to Katrina. And on this anniversary, it looks like hurricane season may be getting ready to kick into high gear — the subject of my previous post today. Given all of this, I thought it would be interesting to post the map above showing tropical cyclone tracks in the Western Hemisphere going all the way back to 1842. It's from NOAA's Environmental Visualization Laboratory, based on tracking data on 11,967 tropical cyclones worldwide. In the map, each track does not represent a single cyclone. Rather, the color of each line shows how many times cyclones overlapped on that particular track. The brighter and yellower the line, the more cyclones that have followed that track. Let's hope that any tropical cyclones that form during the rest of the season remain at sea — or at least that none follow Katrina's lead, literally and figuratively.