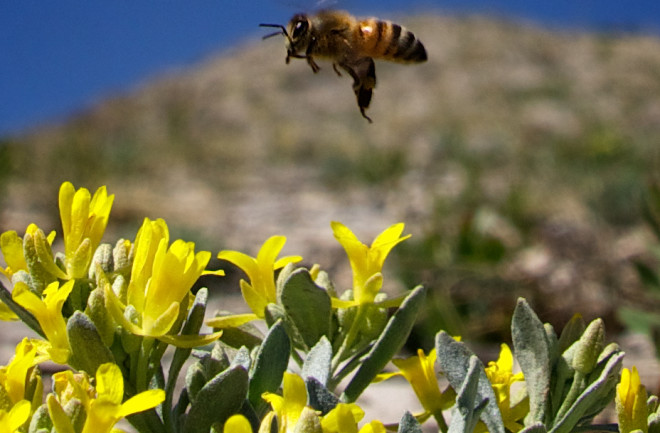 A bee hovers above blooming Bell's twinpod, a rare plant that grows only on shale slopes along Colorado's Front Range. (Photo: © Tom Yulsman) With warmer weather, the bees are finally out and about here at the foot of the Rockies in Colorado. I recently encountered this guy in mid-hover as he was eyeing what must have been delectable pollen from a rare and endangered plant growing north of Boulder. He's a honeybee, and a rather handsome one at that. He and his compatriots are in the news once again with the release last week of a major report on what has been causing millions of honeybees to die since 2006 in a phenomenon known as colony-collapse disorder. As the report puts it, "CCD is characterized by the sudden loss of worker adults from managed hives, leading to the eventual collapse of the entire colony within a few weeks." The report found that a litany of factors are probably to blame, including pesticides, viruses, bacteria, poor nutrition, and a lack of genetic diversity. (The New York Times ran a good summary of the report last Thursday.) I'll get back to the bee in a minute. But first I want to say a few things about the amazing and exceedingly rare plant that attracted the bee to its flowers. Its common name is Bell's twinpod, and it exhibits extreme endemism, growing on just a small handful of shale and limestone slopes along the northern Front Range of Colorado — and nowhere else. Physaria bellii is a member of the mustard family. Because of its extremely limited range, along with mining, urban sprawl, and invasive weeds, the plant is very much imperiled. But scientists aren't exactly sure to what degree. The plant's status is listed as "G2/G3". This means that at best, it is at moderate risk of extinction, and at worst it is at high risk of disappearing completely. Every spring at about this time I go out to a shale slope west of my home to check on how these plants are doing, and take pictures. This year, the bees were humming around my ankles, so I decided to try to photograph one. I set a fast shutter speed on my camera, hand-held it on the ground pointing at the plant, took a burst of shots, and hoped for the best. It obviously worked — although I was astounded to note that even with a shutter speed of an 800th of a second, the wings of the bee still are almost completely blurred. That got me to hunting around for some information. And from a scientific paper that includes everything you always wanted to know about how bees fly (and maybe some things you never imagined at all), I learned that they flap their wings about 240 times each second. That's puzzling, because I would think that with a faster shutter speed, the camera would have frozen the wings in the image. But maybe it has something to do with resolution. I'm not sure. If you have any ideas, let me know!

A bumblebee on the hunt for delectable nectar. (Photo: © Tom Yulsman) Unlike honeybees, bumblebees are native to Colorado. This striking individual is a member of the Bombus huntii tribe — or I should say species. The common name is Hunt's bumblebee, and the species is one of two dozen found in Colorado. Bumblebees are very important pollinators of native plants here. Despite this bee's relatively zaftig appearance, it dashed about with amazing agility. And once again, despite the fast shutter speed, I didn't freeze the wings. Next time.