A vast area of the western Amazon--arguably the most intact and biodiverse part of the Amazon--is now wide open for oil and gas development. This is a new threat to the forest, biodiversity, and many indigenous groups living in the region. Research by Finer et al. in PLoS ONE demonstrates full scale impacts, including an assessment of relevant conservation and indigenous rights policies. Oil and gas blocks in the western Amazon 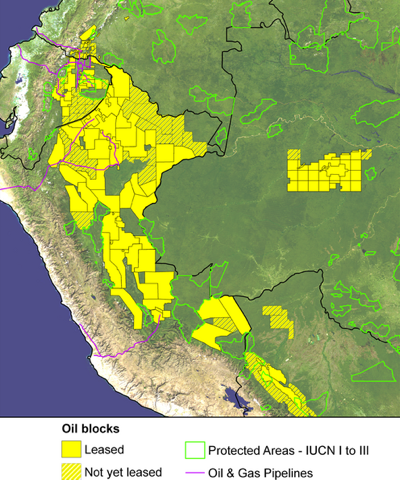 The western Amazon is the most biologically rich part of the Amazon basin and is home to a great diversity of indigenous ethnic groups, including some of the world's last uncontacted peoples living in voluntary isolation. Unlike the eastern Brazilian Amazon, it is still a largely intact ecosystem. Underlying this landscape are large reserves of oil and gas, many yet untapped. The growing global demand is leading to unprecedented exploration and development in the region. We synthesized information from government sources to quantify the status of oil development in the western Amazon. National governments delimit specific geographic areas or "blocks" that are zoned for hydrocarbon activities, which they may lease to state and multinational energy companies for exploration and production. About 180 oil and gas blocks now cover ~688,000 km2 of the western Amazon. These blocks overlap the most species-rich part of the Amazon. We also found that many of the blocks overlap indigenous territories, both titled lands and areas utilized by peoples in voluntary isolation. In Ecuador and Peru, oil and gas blocks now cover more than two-thirds of the Amazon. In Bolivia and western Brazil, major exploration activities are set to increase rapidly. Without improved policies, the increasing scope and magnitude of planned extraction means that environmental and social impacts are likely to intensify. We review the most pressing oil- and gas-related conservation policy issues confronting the region. These include the need for regional Strategic Environmental Impact Assessments and the adoption of roadless extraction techniques. We also consider the conflicts where the blocks overlap indigenous peoples' territories.