Efforts to raise octopuses in captivity, like we do with salmon and other fish, are on the rise. But farming these sea creatures to become our food might be unethical and bad for the environment, some scientists say. 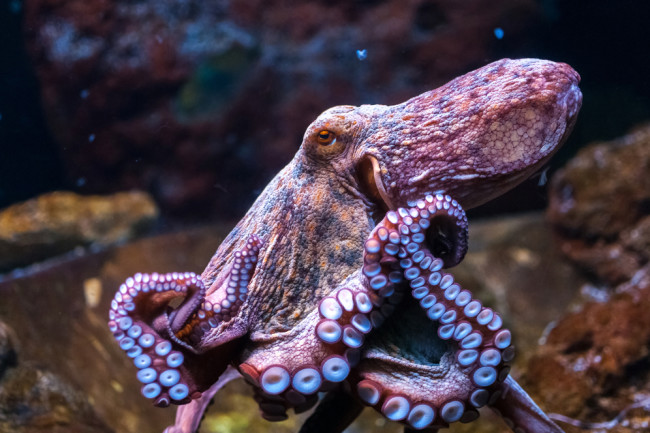 Some researchers have wanted to commercially farm octopus for decades. From trying to raise hatchlings themselves to storing the wild invertebrates in submerged cages, scientists have tried a range of techniques to cultivate watery fields with on-demand access to the elusive creatures.

The closest researchers have gotten is catching wild octopus for a few months of captive rearing before harvest. Today, there are still no functional octopus farms raising the sea creatures from hatchlings in operation — and that’s how some researchers argue things should stay.

In 2019, a handful of scientists started to raise questions about the ethical and ecological issues that might come from farming these remarkably intelligent animals. Speaking up about these concerns before octopus farming becomes a reality was part of the point, says Jennifer Jacquet, an interdisciplinary scientist at New York University. “Our goal was to create that dialogue before [octopus farming] becomes embedded in our society,” she says.

The desire to make this kind of aquaculture work has intensified recently, in part because appetites for octopus have grown. If reported harvesting levels are accurate — and in some cases, they likely underestimate actual fishing levels — the amount of octopus pulled from the oceans almost doubled between 1980 and 2014. Farmed octopus, some argue, could alleviate pressures on wild populations, which are single-handedly meeting market demands. Some scientists speculate that global octopus populations are booming, but specific wild populations in spots around the world are at risk of collapse from over-harvesting.

For those against octopus farming, the need to meet demand isn’t a good enough reason to make these ventures a reality. Octopus is mostly a delicacy — it’s not typically an ingredient that food-insecure communities rely on. That status means octopus probably doesn’t have to be available at record-high levels through farming, Jacquet and her colleagues point out. Without these mollusks raised in captivity, “it does not mean that food security will be undermined,” they write in one of their public letters on the topic. “It will mean only that affluent consumers will pay more for increasingly scarce, wild octopus.”

Instead, some argue, the ethical considerations of raising these highly-intelligent animals in captivity should take priority over developing niche markets. Octopuses (yes, that is the correct plural of the noun) are smart. The eight-legged mollusks solve puzzles and escape complicated enclosures, and might even turn shells, rocks and other bits of their environment into tools. Raising these creatures in confined settings that might deprive them of the wider environments they like to explore is a step too far, Jacquet says.

The prospect of low-quality, lifelong living conditions are part of why some ecologists signed onto a letter against octopus farming that garnered over 100 co-signers and ran in the journal Animal Sentience. For some, octopus fishing — catching the individuals in the wild — is ethically fine, as the animals live a normal life prior to capture. “Some people wanted to sign our letter because we were about farmed octopus,” Jacquet says. “They would not have signed on to wild-capture fisheries.” For those that were against farming, the convincing factor was, as Jacquet puts it, “that element of subjecting what appears to [be an animal with] higher-order consciousness a life of captivity for an indefinite number of years.”

Of course, we already farm other animals considered intelligent, like pigs. This fact might be used to rationalize putting octopuses in the same position. The pig issue came up when Jacquet spoke with ecologists interested in signing the published letter as well — some people didn’t want to be hypocrites for saying "no" to farmed octopus while gladly eating pork. The difference, Jacquet found, was that pig farming is heavily integrated into diets, and has been for decades. Since octopus farming has yet to materialize, the unethical treatment of the creatures could be prevented. In short, even if you eat pork, “you’re not interested in subjecting another conscious figure to the fate pigs have suffered,” Jacquet says.

Animal welfare issues are fairly persuasive, but there are also ecological points to the anti-octopus farming argument. Supporters of the endeavor think that hand-rearing these sea creatures could take hunting pressure off their wild counterparts and help them thrive. But feeding the captive-raised octopus might harm populations of other wild aquatic species.

Octopuses are carnivores, and experiments to design the best diets for the growing, captive creatures have tested foods such as mackerel and crab. Whatever might get fed to future captive octopuses will likely come from the wild — the same way wild sardines and anchovies feed farm-raised salmon and carp, for example. Even without octopus contending for a share of the wild catches, researchers are already arguing that sardine fishing levels need to scale back if we want to harvest from these populations for decades to come.

The possibility of octopus adding their own pressure to farmed-for-food fish stocks might still fail to materialize. Some target species for farming operations produce incredible numbers of eggs and might lay up to 5,000 at a time. Once the eggs hatch, researchers still struggle to keep a significant percentage of the octopuses alive and raised to full maturity.

If these hurdles are eventually cleared — and if octopus farms become mainstream — then at least a range of biologists, ecologists and philosophers have made an argument against the practices, Jacquet thinks. "This doesn’t just 'have to happen'," she says. And if it does, "it will be because we made an active choice to ignore the ethical concerns."