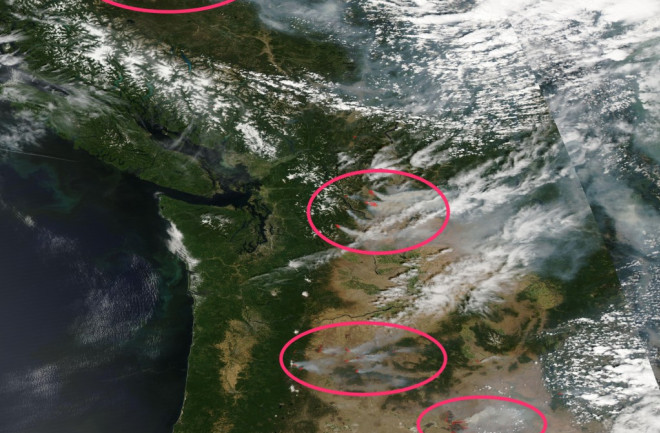 Smoke plumes from wildfires burning throughout the Pacific Northwest are circled in this image acquired by NASA's Terra satellite on Thursday, July 17, 2014. Click to see detail in a larger, high-resolution image. (Source: NASA) | Updated 7/19/14, 10 a.m. MDT: see new image below | Ignited by lightning strikes on hot and tinder dry forests, more than a dozen large wildfires are raging throughout the Pacific Northwest of the United States and up into British Columbia.

Click for interactive map. In Oregon and Washington alone, more than 310,000 acres were ablaze as of yesterday (July 17), according to the Northwest Interagency Coordination Center. That's an area more than twice the size of the city of Chicago. For an interactive map of the wildfires, click on the thumbnail at right. The image at the top of the post, acquired by NASA's Aqua satellite yesterday, provides a broad geographic overview of the region. I've circled some of the obvious wildfire complexes in Oregon and Washington and also extending up into British Columbia, where plumes of smoke can be seen streaming from fires there. Click on the image for a larger, high-resolution version that shows quite a bit of detail. | Update, 7/19/14: Here's a dramatic overview image, from the U.S. Weather Service in Boise, Idaho, showing the fire situation as of two days ago:

A closer view of wildfires burning in Oregon, acquired by the Aqua satellite on July 17, 2014. (Source: NASA) July and August are normally the driest months in the Northwestern United States. Even so, more than 70 percent of Oregon is now in drought, according to the latest report of the U.S. Drought Monitor, issued yesterday. (Click here for a map of drought conditions in the state.) And temperatures in the Northwest overall have recently averaged 8 to 12 degrees F above normal, with highs in the 90’s and 100’s.

A closeup view of wildfires burning in Washington state on Thursday, July 17, 2014, as seen by NASA's Aqua satellite. Puget Sound, with the city of Seattle on its eastern shore, is at the extreme left of the image. (Source: NASA) Conditions in Washington state are not as dry as they are in Oregon. Even so, half of the state is abnormally dry, and 33 percent is experiencing moderate to severe drought. (Click here for a map of drought conditions in Washington.)

Large plumes of bluish smoke can be seen streaming from wildfires in British Columbia in this image captured Thursday, July 17, 2014 by NASA's Aqua satellite. (Source: NASA) Two significant wildfires and one smaller one are visible in the image of British Columbia above, acquired by the Aqua satellite yesterday. Near the left edge of the image is the Eutsuk Lake Fire, currently estimated at 3,576 acres by the British Columbia Wildfire Management Branch. To the east are the two much larger fires. First is the Chelaslie River Fire estimated at 32,124 acres. And still farther east is the Euchiniko Lakes blaze, currently at 17,297 acres. According to the three-month outlook from the U.S. Climate Prediction Center, the odds are better than even that Oregon and Washington, as well as California, Nevada and parts of Arizona, Utah, Idaho and Montana, will experience above normal temperatures. And for much this region, drought conditions are expected to persist through at least the end of October. So we should expect heightened wildfire activity to continue. Stay tuned...