An animation of GOES-16 weather satellite imagery reveals thick palls of smoke billowing up from wildfires in British Columbia on Aug. 11 and 12, 2017. The smoke rose into the stratosphere and ultimately circled the globe. Eight months later, some was still visible to satellites. (Credit: RAMMB/CIRA)

Now, there may be another reason to pay attention to these fires: A new study, just published in Science, has used one such blaze as a kind of natural experiment to test aspects of an idea first raised by scientists at the height of the Cold War in the 1980s: nuclear winter.

A co-author of the study says the research supports earlier findings that even a relatively small, regional nuclear war would have dire climatic consequences. The cause: smoke billowing up from burning cities.

“The smoke would be lofted into the stratosphere, lasting for years and carried by winds around the entire Earth,” says Alan Robock, a Rutgers University climate scientist.

Robock was an early proponent of the original nuclear winter theory of the 1980s. Based on relatively simple computer modeling, the theory held that a full-scale nuclear war between the United States and Russia would have indirect impacts even more cataclysmic than the direct ones from explosions, radiation and fires.

Smoke from blazing cities would blot out the sun, causing the climate to cool by as much as 45 degrees F in the northern mid-latitudes, with cold temperatures lasting for years. The ultimate result: crop failures, global famine, and even the extinction of the human species.

As Carl Sagan, one of the original proponents of nuclear winter, put it in 1983: “For the first time, we see that the consequences of nuclear war may be absolutely devastating for nations far removed from the conflict.”

Later research pointed toward something more akin to nuclear “fall” than full-blown winter. Even so, the climatic effects were still seen to be very dangerous, with large impacts on the environment and agriculture.

The new study builds on research by Robock and colleagues in 2007. Using state-of-the-art climate modeling, that work demonstrated how even a regional nuclear war could loft enough smoke very high into the stratosphere to cause dangerous climate change.

That 2007 research showed that sunlight would heat soot in the plumes of smoke, creating strong updrafts. This “self-lofting” process would, in turn, pump smoke up into the highest reaches of the stratosphere. Because there’s no rain there to wash it out, the smoke would then circle the globe for a long time.

The Canadian pyrocumulonimbus event studied by the researchers erupted on Aug. 12, 2017. This animation of imagery from the Suomi-NPP satellite starts two days before and ends on the 19th. It shows wildfire smoke (distinguished from clouds by its brownish color) spreading east across the entire country and out over the Atlantic Ocean. Red dots show areas of active burning. (Image Credit: NASA Worldview. Animation: Tom Yulsman)

In the new study, the scientists once again employed a state-of-the art climate model. But this time they used it to simulate the observed behavior of an actual smoke cloud rising from raging wildfires in western Canada in August of 2017. The primary goal: To see whether self-lofting of soot could be identified, and whether it did carry smoke high into the stratosphere.

The heat and smoke from these Canadian fires produced five near-simultaneous fire-storm clouds, known as a pyrocumulonimbus clouds, or “pyroCbs.” The amount of smoke that reached the stratosphere was an order of magnitude larger than in any previous documented pyroCbs — comparable, in fact, to that of a moderate volcanic eruption.

Here is an image produced by a sensor on the Calipso satellite — part of a study published in 2018 by different researchers — showing the evolution of the smoke from these pyroCbs: 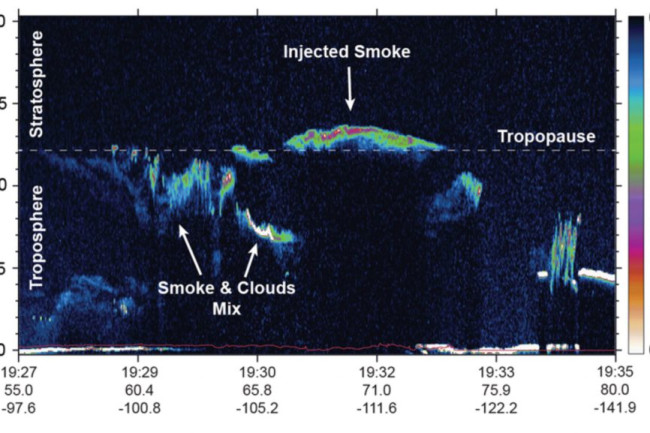 The Calipso satellite observed smoke from pyrocumulonimbus clouds exploding from the Canadian wildfires on Aug. 12, 2017. The smoke was injected into the stratosphere within about three minutes. [Adapted from: “Wildfire-driven thunderstorms cause a volcano-like stratospheric injection of smoke,” NPJ Climate and Atmospheric Science, 1, Article number: 30 (2018)]

In their study, Robock and his colleagues found that when the smoke in the pyroCb event reached the lower stratosphere, heating from sunlight did indeed cause the “self-lofting” behavior, just as the earlier study predicted. Within two months, this carried the smoke from seven miles up in the atmosphere to 14 miles up.

Pengfei Yu, lead author of the new study in which Robock participated, notes that with a small forest fire, smoke typically stays in the lower atmosphere. Within a week, it washes out.

But after the smoke from the large Canadian blazes was pumped high into stratosphere by the self-lofting process, it was transported throughout the Northern Hemisphere — and was still visible to satellites eight months later, according to Yu, an atmospheric scientist at Jinan University in China. 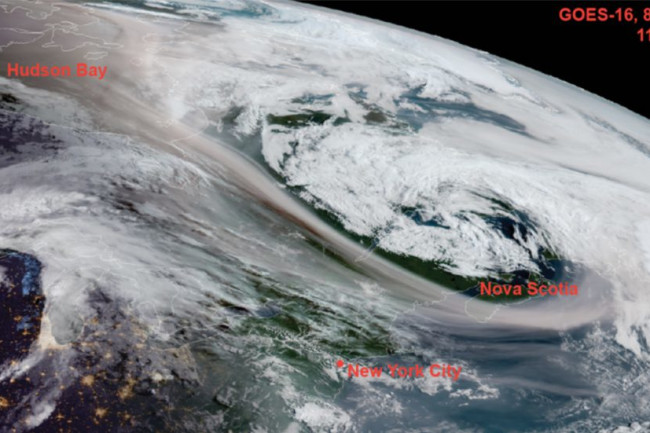 True color imagery from the GOES-16 weather satellite near sunrise on August 17, 2017. The stratospheric smoke plume (in brownish tones) extends from Hudson Bay to the northern Atlantic Ocean. (Credit: Adapted from “Wildfire-driven thunderstorms cause a volcano-like stratospheric injection of smoke,” NPJ Climate and Atmospheric Science, 1:30, 2018)

He points out that smoke from cities left burning by a regional nuclear war — like one that could break out between India and Pakistan — would carry much greater amounts of soot than the Canadian wildfire smoke did. And an all-out nuclear conflagration between Russia and the United States would be orders of magnitude worse.

Yu and his colleagues estimated that the massive fire cloud from the 2017 Canadian blazes lofted about 300,000 tons of smoke into the atmosphere. Of that, about 6,000 tons was soot — 2 percent of all the material rising up from the fires.

Compare that to the 15 million tons of smoke that Robock and other scientists have estimated would rise into the stratosphere as a result of nuclear war between India and Pakistan.

As for a full-scale U.S.-Russia nuclear war, the total would reach an estimated 150 million tons of smoke, they say. That’s 25,000 times more than from the Canadian wildfires.

“We observed the self-lofting of smoke in the stratosphere for the first time,” Robock concludes. “This confirms the results of our previous climate model simulations of what would happen to smoke resulting from fires started by nuclear war.”

Moreover, he and his colleagues were able to model the self-lofting of the smoke with the same climate model they have been using for their nuclear research.  “So this gives us confidence in the model results when simulating a much larger amount of smoke,” he says. 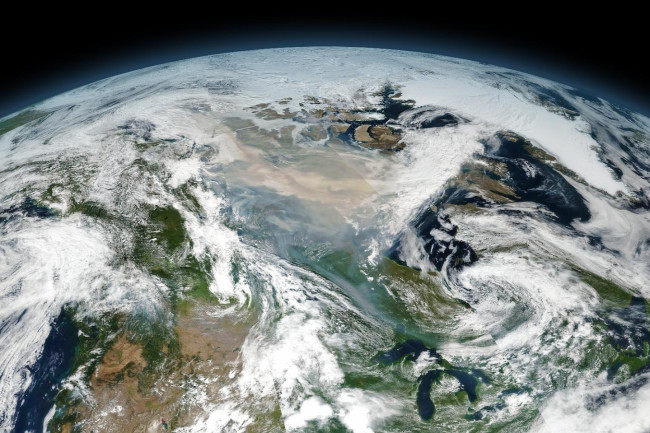 A thick and widespread pall of smoke is seen over northern Canada in this image created from data collected by the Suomi NPP satellite on August 15, 2017. (Credit: NASA Earth Observatory)

“It’s quite an interesting detective story,” observes Michael MacCracken, chief scientist with the Climate Institute in Washington, D.C. “It looks like an interesting and well done study.”

But MacCracken, who was not involved in the research, argues that there are too many uncertainties to conclude that it would result in a global food crisis from climatic cooling.

The conclusion rests on the assumption that both India and Pakistan would each target all of their roughly 50 nuclear weapons on cities. “Would they really fire all that they have?,” MacCracken asks. “It’s hard to know what would really happen. And would they target all their weapons at cities?”

Then there is the question of how much combustible fuel there is in cities. Is there enough to create sufficient smoke — and self-lofting soot — to produce dangerous climatic effects? There is considerable disagreement on how much smoke actually would be produced, he says.

Varying weather conditions also add uncertainties. “There has to be the meteorology that would allow lofting well up to the stratosphere,” MacCracken says. “It ends up being terribly hard to get a real quantitative handle.”

But despite these observations about the uncertainties, MacCracken nonetheless believes there is a risk of significant climatic effects. And even without them, the devastating direct impacts of a regional nuclear war — through the nuclear explosions, resulting fires, and radioactive fallout — are reason enough to avoid it.

“While the smoke from fires started by a significant nuclear conflict would likely have some effect, even a severe effect, on the weather in seasons afterward, these effects are not nearly the first reason that nations with nuclear weapons should avoid getting even near to using them,” MacCracken says.

As for Alan Robock, he stands by his long-standing convictions — about the dire impact of a full-scale nuclear war, as well as a relatively smaller, regional one.

“A full-scale nuclear war between the U.S. and Russia could still produce nuclear winter,” he says. Thanks to the new results, “we have more confidence in this result — but the result does not change.”

The new findings also suggest that the climatic impact of a regional nuclear war could actually be worse than he and his colleagues believed at the time of their 2007 study. “We first studied this more than 10 years ago, and we now think that such a war might have a worse result, as each country now has more nuclear weapons and they are larger,” he says.

“The only solution is for all the countries of the world to sign the Treaty on the Prohibition of Nuclear Weapons, which now has been ratified by 24 nations,” he argues.

One thing is certain: No matter how severe the climatic impacts of even just a regional nuclear war might be, it would be an unimaginable tragedy for all humankind.