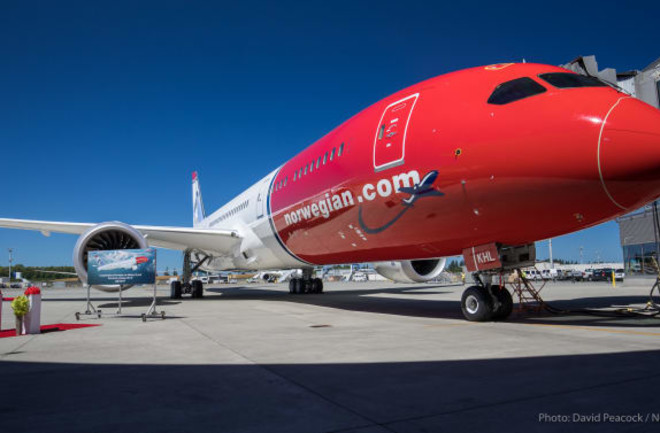 The airplane that did it all. (Credit: Norwegian) Passengers aboard jetliners making transatlantic flights are getting from point A to B much far faster. On Thursday, a Norwegian 787 Dreamliner reached a speed of 779 mph after getting some help from a vigorous, 224 mph tailwind. The flight, DY7014, set a new subsonic transatlantic record, flying from JFK Airport in New York to London’s Gatwick airport in 5 hours, 13 minutes. That’s roughly 30 minutes faster than average, and three minutes faster than the record set in 2015. “The passengers and crew were very pleasantly surprised that we were already landing in London. It was a very smooth flight with almost no turbulence and as a result of the jet stream we arrived 25 minutes early,” said Pascal Niewold a captain aboard the Norwegian flight. If it weren't for turbulence forecast at lower altitudes, the flight would have arrived even earlier. Randall Miles, who was aboard a different transatlantic flight benefiting from the stream last week, told Wired he woke up from a nap and noted the jet’s speed: 770 mph. “I thought, ‘Damn, this thing is hauling ass,” he said, speaking to Wired. While the speed of sound is 767 mph, passengers aboard the Norwegian flight didn’t break the sound barrier despite traveling 779 mph at one point. The plane only reached that speed due to the strong tailwind; therefore, the wind flowing over the wing was only moving at a speed of 779-224=555 mph. Relative to the surrounding air, like a boat floating on a raging river, the airplane remained well below supersonic speeds. Of course, the overall record for the fastest transatlantic flight belongs to British Airways Concorde, a supersonic jet that completed the puddle jump in 2 hours, 52 minutes on Feb. 7, 1996. At the time, it was also the beneficiary of a potent tailwind.

The record-setting flight. (via LiveScience) Flight controllers always look to the transatlantic jet stream to save on fuel costs. Jet stream forecasts are prepared and flight plans look to maximize its effect. According to Wired, the above-average jet stream should last a few more days. However, this river of moving air is bound to deviate from the norm more often as climate change progresses. A recent study from researchers at the University of Arizona and the Swiss Federal Research Institute found that the polar jet stream has meandered off its path and into more extreme positions more frequently since the 1960s. To arrive at their conclusion, they studied the boom and bust cycles of growth captured in tree rings. Erratic behavior in the jet stream may be contributing an uptick in extreme weather events around the world, they say.