NOAA confirms it: temperatures across Earth's land and sea surfaces are still running at record highs

Earlier this week, NASA released its monthly analysis of global average temperatures — and now NOAA has followed with its own. The two agencies concur: With last month coming in as the warmest May on record, average temperatures across Earth's land and sea surfaces continue to run at record highs. According to both NOAA and NASA, January through May 2016 was the warmest such period on record. And the record-breaking streak actually goes back even farther — a total of 13 months by NOAA's reckoning. That's the longest such streak since the record began in 1880. NASA, which uses the same temperature data but goes about its analysis differently, finds that each of the last eight months has been record warm.

Other tidbits from NOAA's report:

That last bullet point is worth noting in particular. With El Niño — a global warming booster — now gone, and a cooling La Niña phase probably on the way, sea surface temperatures in the eastern and central tropical Pacific are dropping.

Despite this cooling, the odds are still good that 2016 will finish as warmest on record. But beyond that, human-caused global warming may slow a bit, or even plateau temporarily. That wouldn't be unusual, since the upward trend in global average temperatures due to humankind's emissions of greenhouse gases does not run in a straight line. 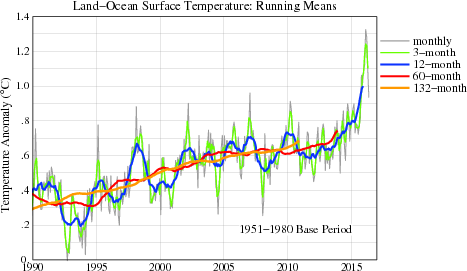 Source: NASA Goddard Institute for Space Studies/Makiko Sato, Columbia University) The graph above shows the overall warming trend since 1990 over different timescales. When you look at monthly and 3-month means, a very sharp up-and-down sawtooth pattern is quite evident. That shows just how much things can vary on the shortest timescales. On an annual scale (the blue line), there significant accelerations — just like we've been experiencing as of late — as well as plateaus and even some dips. If in a year from now, that blue line is no longer shooting straight up, we shouldn't be surprised. On the other hand, the red and orange lines show that over the longest periods, the overall upward trend is pretty much unrelenting.