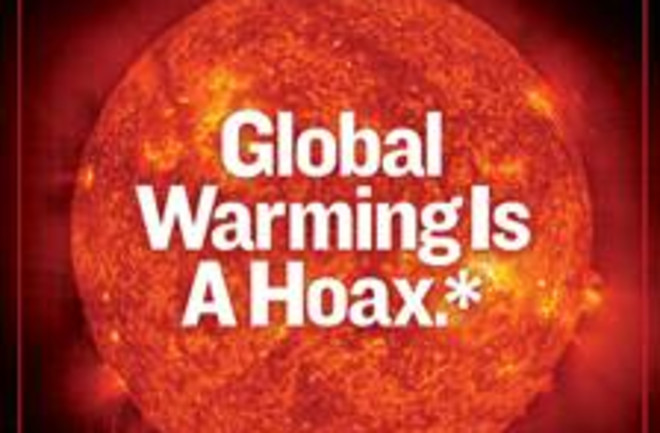 Several weeks ago, Newsweek ran a much-discussed cover story by Sharon Begley "revealing" the story that many of us have been writing for years: There has been a campaign, supported by many fossil fuel interests, to sow doubt about mainstream climate science. Duh. The main newsworthy thing about this effort, to my mind, is that it now appears in decline. But it was a naughty, naughty thing to do, and it certainly ought to be exposed and re-exposed. So far, so good. But then comes Newsweek's own Robert Samuelson with a chowder-headed takedown of his own magazine's "Truth About Denial" cover story. Samuelson said stuff like this:

Against these real-world pressures, NEWSWEEK's "denial machine" is a peripheral and highly contrived story....The alleged cabal's influence does not seem impressive. The mainstream media have generally been unsympathetic; they've treated global warming ominously. The first NEWSWEEK cover story in 1988 warned THE GREENHOUSE EFFECT. DANGER: MORE HOT SUMMERS AHEAD. A Time cover in 2006 was more alarmist: BE WORRIED, BE VERY WORRIED. Nor does public opinion seem much swayed. Although polls can be found to illustrate almost anything, the longest-running survey questions show a remarkable consistency. In 1989, Gallup found 63 percent of Americans worried "a great deal" or a "fair amount" about global warming; in 2007, 65 percent did. What to do about global warming is a quandary. Certainly, more research and development. Advances in underground storage of carbon dioxide, battery technology (for plug-in hybrid cars), biomass or nuclear power could alter energy economics. To cut oil imports, I support a higher gasoline tax--$1 to $2 a gallon, introduced gradually--and higher fuel-economy standards for vehicles. These steps would also temper greenhouse-gas emissions. Drilling for more domestic natural gas (a low-emission fuel) would make sense. One test of greenhouse proposals: are they worth doing on other grounds? But the overriding reality seems almost un-American: we simply don't have a solution for this problem. As we debate it, journalists should resist the temptation to portray global warming as a morality tale--as NEWSWEEK did--in which anyone who questions its gravity or proposed solutions may be ridiculed as a fool, a crank or an industry stooge. Dissent is, or should be, the lifeblood of a free society.

First, some of this is just incorrect. For example, studies such as Boykoff & Boykoff (PDF) suggest that for many years the media was indeed highly influenced by strategic attempts to undermine climate science and responded with "balanced" coverage of the issue. Samuelson conveniently leaps from 1988 to 2006 in his discussion of media coverage, skipping over the years when phony "balance" was most prevalent, and when--correspondingly--political gridlock set in. Samuelson deserved to be raked over the coals for this, and up to the plate steps risk assessment expert and victorious OSHA whistleblower, Adam Finkel. Finkel wrote a letter to Newsweek taking on Samuelson. The letter wasn't published, but Finkel gave me permission post it. It's pretty scathing, particularly when it comes to Samuelson's facile economist's approach which of course fails the test of real cost-benefit thinking. Finkel's critique runs as follows:

Let me get this straight. Robert J. Samuelson ("Greenhouse Simplicities," Aug. 20/27) not only admits that global warming is a terrible problem, but believes it's too far advanced for us to control. So he goes after Sharon Begley and Newsweek for reporting on the well-funded propaganda machine that has been spreading confusion and misinformation about the underlying science, thereby making the problem even harder to control? He says that the science is "peripheral" compared to the dilemma of what to do, but his illogic about controls is even more glaring. Every ton of carbon dioxide the U.S. manages not to pump into the atmosphere will reduce the damage below what it otherwise would have been--China's emissions, controlled or uncontrolled, will be even more damaging if we don't do what we can. Besides, Samuelson's test of what makes a worthwhile control idea (is it worth doing for other reasons anyway?) is a recipe for mediocrity. Even the "dismal science" of economics is supposed to favor actions whose benefits outweigh their costs, not just the subset with positive benefits and negative costs! A story that glorifies everyone's opinion, no matter how pernicious, is neither good journalism nor good for intelligent debate. It's nice to know that Samuelson and Newsweek's editor ("The Editor's Desk," Aug. 20/27) agree on the virtue of "dissent," but they're both confused about the difference between a contrarian and a charlatan, a line defined inexorably by the scientific facts. Calling James Inhofe a dissenter is a lot like calling Scooter Libby a whistleblower.

UPDATE: Adam Finkel tells me he'll reply to any comments tonight "if called for," so post away!