Two views of California captured by NASA's Terra satellite use false color to differentiate between clouds (whitish) and snow (orange-red). The first image was acquired on Nov. 25, 2014, before two storms hit California. The second is from Dec. 13th, after the second storm. (Images: NASA. Animation: Tom Yulsman) If you've been following news reports about California's epic drought in the aftermath of the recent storms there, it would be understandable if you've found yourself perplexed. "Finally, Some Good News In The California Drought" read the headline in Huffington Post. "Flood-Causing Deluge Amounts to Just Drops in California Drought" proclaimed the New York Times' glass-almost-empty headline: Refilling the glass a bit, the San Jose Mercury News stuck to reporting facts: "Winter storms finally starting to boost storage levels in key reservoirs". Meanwhile, Wired, like the Times, spun the story gloomily : "Think California’s Huge Storm Will End the Drought? Think Again" As you probably know (assuming you haven't been in hibernation), California has been on the receiving end of a veritable gusher of atmospheric moisture originating in the tropical Pacific. The first blast from this so-called "Pineapple Express" firehose came on December 2. The second — and more powerful — round of storminess hosed California starting overnight on Dec. 10th and continuing through the 11th. It dumped an extraordinary amount of moisture. In its story, the Times quoted Jon Gottschalck of the Climate Prediction Center as saying, "Most of the precipitation was rain...It wasn’t really adding to the snowpack, which is really what they need...Certainly this is good. But it’s going to be just a minor dent in the drought.” But as Paul Rogers reported in his excellent Mercury News story, the state's two largest reservoirs, Shasta Lake near Redding, and Lake Oroville in Butte County, were projected to receive 510,000 acre-feet of water in storm runoff by Tuesday.

That's a staggering amount of water -- 166 billion gallons from a single storm, enough water for 2.5 million Californians for a year. It would fill half a million football fields one-foot deep...

What gives? Well, lets start with your eyes. Check out the animation at the top of this post (if you haven't already). I created it to show a before and after comparison of the Sierra Nevada range, which cuts diagonally across part of the frame. (Click on it to watch a gloriously large version.) The first image was captured by NASA's Terra satellite on Nov. 25th, before the storms blew through. The second was acquired on Dec. 13th, after the second storm. To produce the animation, I chose images built of wavelengths of light that are good at distinguishing snow from clouds. The snow turns up in red and orange tones, whereas clouds are more whitish and with a little peach thrown in too. And what do your eyes tell you? If you have any doubts, consider what Bill Patzert, a climatologist with NASA’s Jet Propulsion Laboratory, has to say. He's an eyewitness on the ground in Pasadena, and in an email message to me today he proclaimed: "I see snow!" More from Patzert in a minute. But first, you can see the same snow as he did — right there in the satellite imagery. Click on the animation, look in the lower right corner, then come back here. Did you see it? That small splotch of reddish-orange? That's snow in the San Gabriel Mountains outside of Pasadena! But as we know, looks can be deceiving. So let's check the actual numbers: 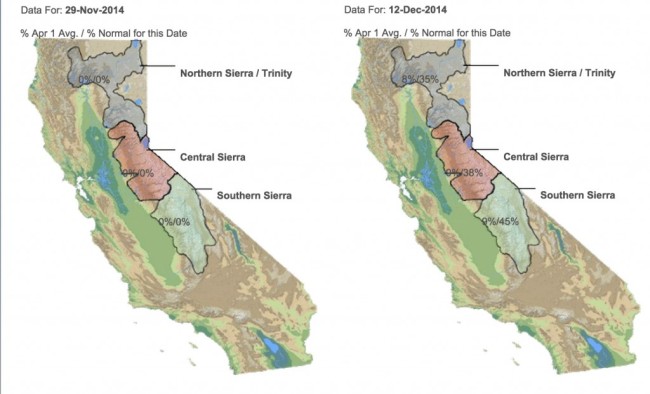 A comparison of the snowpack in California's Sierra Nevada range on Nov. 29 and Dec. 12. (Source: California Department of Water Resources) These maps show something called "snow water equivalent," which is a measure of the water content of snow. The map on the left shows conditions on November 29th. Zip, nothing nada — 0% of normal for the date in all three Sierra regions. But in just two weeks, the snowpack has gone from zero to as much 45%. I don't know about you, but that sure doesn't seem like the precipitation wasn't really adding to the snowpack. So let's just cut to the chase (with more details to follow): The Times blew it, as did other media outlets. This is not to say that the storms have erased California's drought. How could they? If recent research is correct, it has been the worst in 1,200 years. Reservoir levels have dropped precipitously, soil moisture levels have been very low, and groundwater depletion has accelerated.

Paul Rogers of the San Jose Mercury News reports that it will take six additional big storms — and a season with precipitation well above average — to erase this drought.

Bill Patzert is ebullient and cautious, at the same time. Here's the heart of his email message to me:

His reference to El Niño is interesting. I'm sure many Californians are looking hopefully to the Pacific Ocean, waiting for a full-blown El Niño to take shape out there. This phenomenon tends to increase the odds of a wet winter and spring for California.

NOAA pegs the odds of an El Niño finally developing this winter at 65%. Of course, nature has a way of defying forecasts. El Niño could sputter, and other manifestations of natural variability could intervene to push things onto a different course. But I'm sure most Californian's will welcome whatever moisture does come their way (putting aside the damage that flash flooding and mudslides can cause).

And I'm sure they're relieved by what has happened so far. I sure am, and I don't even live there.