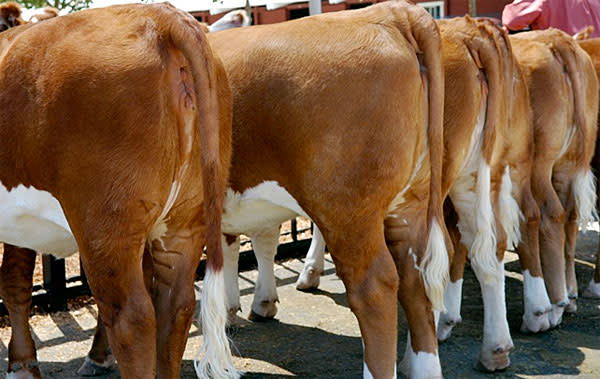 Antibiotic resistance is a well-known menace: Witness the dangers of hospital-acquired MRSA infections, or the totally drug-resistant tuberculosis

found in India earlier this year. FDA statistics show that over 80 percent of antibiotics used in the US are given to livestock

, and heavy animal use is thought to be one of the drivers of resistance among human pathogens. So it behooves veterinarians and public health officials alike to stamp out antibiotic resistance in animals. In the hunt for how this resistance develops, though, scientists have been mostly looking at bacteria inside the digestive system. But it turns out they might have, er, the wrong endof things---a new study finds that drugs excreted in pee and feces may be even more worrisome than those circulating in the bloodstream. As the antibiotic ceftiofur

has become more widely used in cows to treat respiratory disease and infections, E. coli and Salmonella in their guts have become increasingly resistant to it. Similar drugs to ceftiofur are used in people to treat pneumonia and meningitis; the threat to human health is serious enough that earlier this year the FDA announced new restrictions on ceftiofur and its sister drugs

. But the mystery has been how resistance develops in cattle. The drug is injected, not taken orally, and it doesn’t appear to act on cows’ guts. To find out how resistance was spreading, Murugan Subbiah and colleagues at Washington State University first began with the fact that broken-down antibiotics have been found in cow feces and urine, and that these molecules are known to be lethal to bacteria. What remained to be seen, though, was whether urine could therefore shape the bacteria population in soil, encouraging resistant bacteria to spread. In the study

, published last week in PLoS One, the team had the icky task of collecting urine and feces from cows dosed with ceftiofur. When they mixed up cocktails of excrement and soil, they found that urine from treated cows killed off normal E. coli and encouraged the spread of the resistant ones. Thus, simply contaminating a patch of soil with pee may be enough to create resistant bacteria in the wild. And when dairy calves were given bedding sprayed with resistant E. coli, within a matter of days they showed resistant E. coli in their guts as well, showing how easily bacteria made resistant outside the cow's body can leap into the cow's guts. Bacteria are well-known for swapping antibiotic-resistance genes amongst themselves, and this particular kind of resistance has been found to move easily between different species of bacteria

. Thus resistant E. coli in the soil could spread their powers to numerous other kinds of pathogens also present there, including others that infect humans through meat or produce. The scientists propose that if urine is to blame for passing on resistance, solutions may come easier---for instance, farmers may be convinced to change their waste management practices. Just don’t expect a cow potty anytime soon.