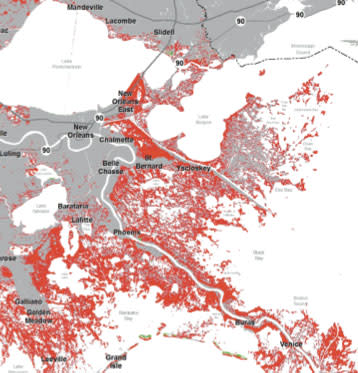 In this graphic from the restoration authority, the land that will be lost to erosion if the plan isn't undertaken is shown in red.

Six years after Hurricane Katrina devastated New Orleans and the Louisiana coast, the state's Coastal Protection and Restoration Authority has finally released a draft of a plan to try to keep it from happening again

. How? By restoring the wetlands along the Mississippi River Delta, which we have more or less systematically destroyed but used to act as buffers between storm surge waves and inland cities. Previous plans had relied on mainly on building levees and seawalls, so it's striking that this plan, which would unroll over the course of 50 years at a cost of $50 billion, focuses on wetland restoration, writes Mark Fischetti

, who has been covering this issue for Scientific Americanfor years

. Here's how it would work:

Along the outer edge of the torn-up coast, furthest from New Orleans, former barrier islands that have been worn to thin wisps of land would be broadened with sandy sediment, mostly dredged from the ocean bottom and conveyed through pipelines. Natural ridges of land along the coast would be strengthened in similar fashion. Together, the islands and ridges would form a dotted line around southeastern Louisiana that can cut down storm surges. They would not all connect, so wind-driven water could still find its way through, but the many segments would break up the incoming wavefront into chaotic eddies flowing in conflicting directions that would at least partially cancel out one another.

The plan is already drawing ire from fishermen

, who say that current restoration projects haven't had much effect, and that all this shuttling of sand and water will interfere with their livelihoods. Read more at Scientific American

. Images courtesy of the Coastal Protection and Restoration Authority