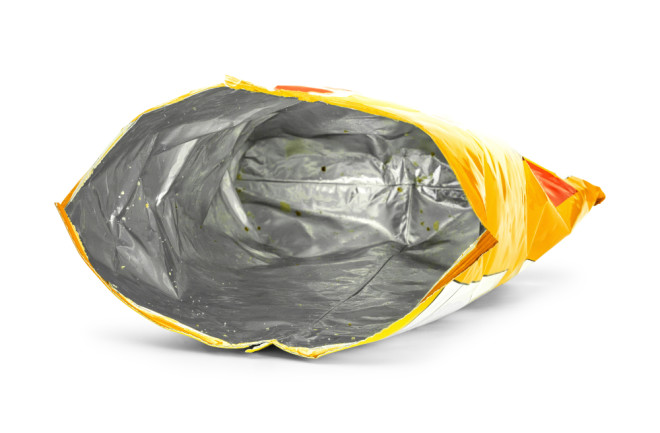 Rip open a bag of chips and you’ll find a shiny, silver material staring back at you. This metallized film helps keep packaged foods like cookies and energy bars tasting fresh by preventing gases from leaking out (or in). The material is the industry standard for flexible, shelf-stable food packaging. But it’s not so great for the environment.

To recycle the lustrous wrappers, the film has to be separated from the rest of the packaging material. The process is complicated and many recycling centers simply do not accept the material, meaning the single-use packaging ends up in landfills.

But a team of researchers is working to change that. The scientists created a new food packaging film that is transparent and “offers new recycling opportunities,” they announced Tuesday in the journal Nature Communications.

The scientists were up against two major challenges: figuring out how to make a stable, non-toxic film and doing it with existing, commercial coating techniques. For a more environmentally-friendly new film to gain traction, it needs to be made in a way that’s economical for producers.

The new material is made from a very thin layer, called a nanosheet, of non-toxic, synthetic clays. The researchers stabilized this nanometers-thin layer with amino acids, chemicals that form the basic building blocks of proteins in plants and animals. Then they applied the film as a coating to a common and highly recyclable plastic called polyethylene terephthalate or PET, the same plastic that water bottles and other beverage and food containers are made from.

Not So Fragile Film

With the new material in hand, the researchers challenged it with several tests. First, they measured the amount of gas the new film would allow through. It turned out to be 50 times less permeable than the PET film currently in use.

Next, the researchers subjected their material to a few beatings. They put the new film through a simulator to test how the film would hold up to the stresses of food packaging during manufacturing, handling and distribution. Even after bending it 200 times, the surface remained smoothed and did not show any defects, the researchers report.

How soon the new films might hit supermarket shelves is unknown. But the researchers say using their material to make flexible, and likely recyclable, food packaging is their first priority.