New Eruption at Alaska's Veniaminof and Evacuations at Guatemala's Fuego 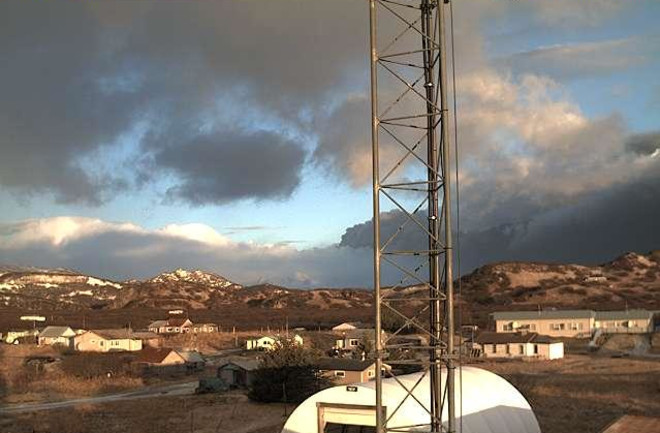 Image from the Perryville (Alaska) FAA webcam showing the plume from Veniaminof(dark cloud behind the antenna). FAA.

Overnight, Alaska’s Veniaminof had its first eruption in a little over a year. An eruption plume reached 4.5 kilometers (15,000 feet) up and the plume was tracked spreading southeast for over 150 kilometers (90 miles). Visibility is low in the area of the Alaska Peninsula where Veniaminof is located, but the Perryville FAA webcam caught a glimpse of the dark grey ash plume (see above) this morning (Alaska time). The Alaska Volcano Observatory raised the alert status to Red after this new eruption started.

The 2018 eruption of Veniaminof was relatively minor, but the activity in 2013 produced some spectacular lava fountains and flows from the volcano (see below). The current active vent is located within an 8 by 11 kilometer caldera. Eruptions in 1984 saw lava flows coat the main vent and make their way onto the caldera floor.

Lava bombs and ash from the 2013 eruption of Veniaminof. AVO/USGS.

Meanwhile, continued explosive eruptions (see below) at Guatemala’s Fuegohas prompted more evacuations from the area around the restless volcano. Video shows lava fountains and a long lava flow cascading down the sides of the volcano. Remember, in June over 100 people died during an eruption that sent pyroclastic flows down the sides of the volcano. At this point, over 4,000 people have had to leave the homes during the new eruptions, many of which don’t want to return after the repeated eruptions and volcanic mudflows generated from all the debris from these blasts.

The brown ash from Fuego in Guatemala, seen on November 20, 2018 by Terra. NASA.
1 free article left
Want More? Get unlimited access for as low as $1.99/month
Subscribe