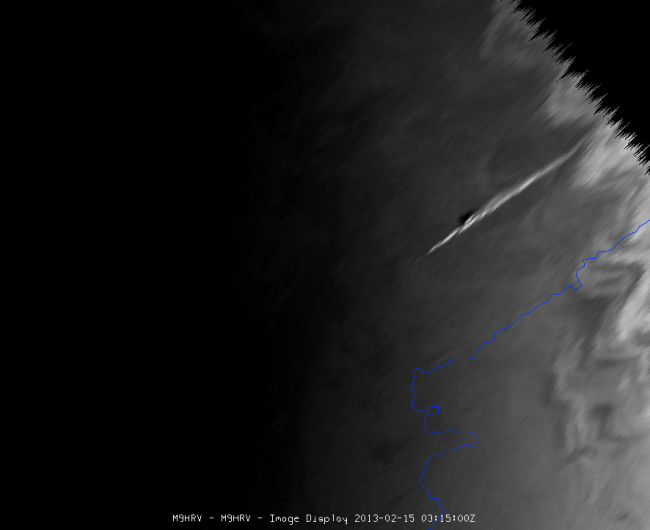 The meteor that exploded over the Urals of central Russia was seen by Meteosat-9, at the edge of the satellite view. (Image: courtesy EUMETSAT)

[Update: As more information has been gathered about the meteor, numbers are being revised. Earlier in the day, the Russian Academy of Sciences stated that the meteor probably weighed 10 tons. A news report in the journal

Nature now estimates that it probably weighed 7,000 metric tons when it entered the atmosphere, which would make it the biggest object to hit Earth since the Tunguska event in 1908. I've left the story below as I wrote it earlier in the day, because it seems evident that all the facts are not yet in, and numbers like this may still change.] [

blog here at Discover. It deals in part with the conflicting reports of the size of the meteor, and how frequently events like this occur. I'll be curious to see whether the Russian Academy of Sciences changes its estimate that the object weighed about 10 tons, and that impacts of this size occur a few times each year. As a non-scientist, I have to say that given the size of the fireball rocketing across the Russian sky, astronomer Margaret Campbell-Brown's estimate of 7,000 tons, as reported in the journal Nature, seems quite believable!

The meteor that streaked across Russia today probably weighed 10 tons as it entered the atmosphere at a velocity between 33,000 and 45,000 miles per hour, according to the Russian Academy of Sciences. And it probably broke up at 20 to 30 miles above the surface. The fragments hurtled through the atmosphere, trailing smoke across the sky and causing a strong shock wave that shattered windows in the city of Chelyabinsk, causing many injuries. According to the Russian academy, a meteor of this size will typically release most of its energy at an altitude between 9 and 12 miles. (In this case, the energy release is estimated at a few kilotons.) Some fragments of a meteor like this typically fall to the ground, but only 1 percent to 5 percent of the original mass. Meteor strikes of this size are not really that unusual. Several occur every year, according to the Russian academy's statement about today's event. The last time one of this size hit Russia was in 2002. It was named the "Vitim bolide," after the Vitim River Basin where the meteor fell.